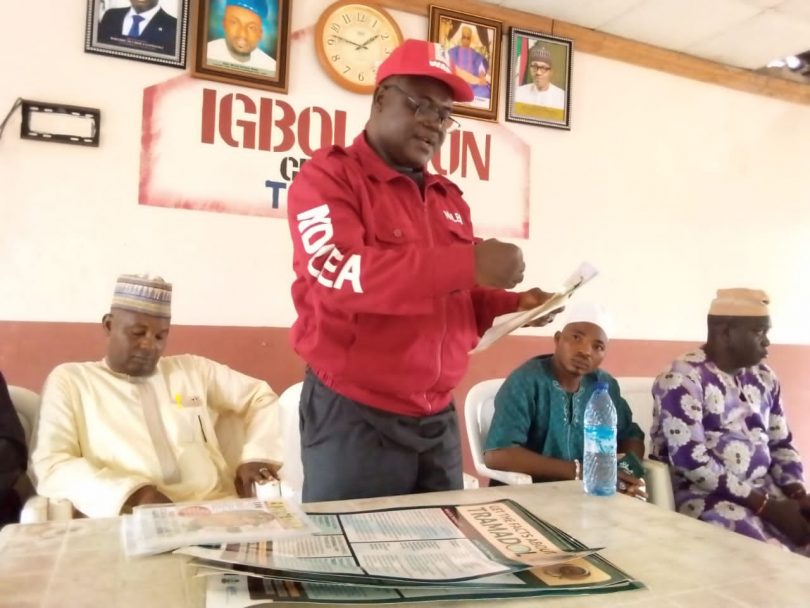 The National Drugs Law Enforcement Agency (NDLEA) Tin Can Island Command, in the quest to rid its neighbourhood of illicit drugs and drug trafficking menace, sensitized on Wednesday, the Igbologun Community Town, Snake Island, Lagos on the danger of drug abuse.

Speaking before the community, the NDLEA Area Controller, Tin Can Island Port Command, Compt. Mohammed Aminu Abubakar explained that the agency was there because of WADA which is a nomenclature for War Against Drug Abuse in the society. 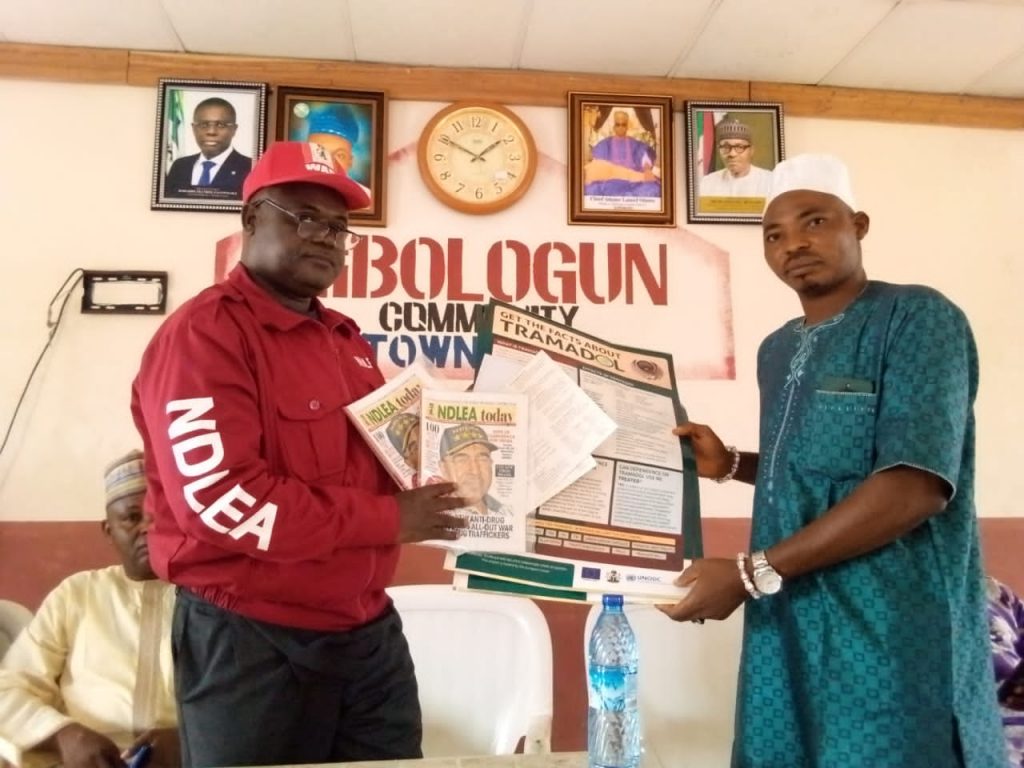 In his words “I believe every household and every community will be having one problem or the other with hard drugs in our midst. If it is not an addiction to using alcohol,  it is an addiction to using other foreign drugs and even over-the-counter drugs like tramadol, panadol and paracetamol, and so on.  And by nature when we talk of drug abuse in our own society it is about taking drugs, not in the normal ways. 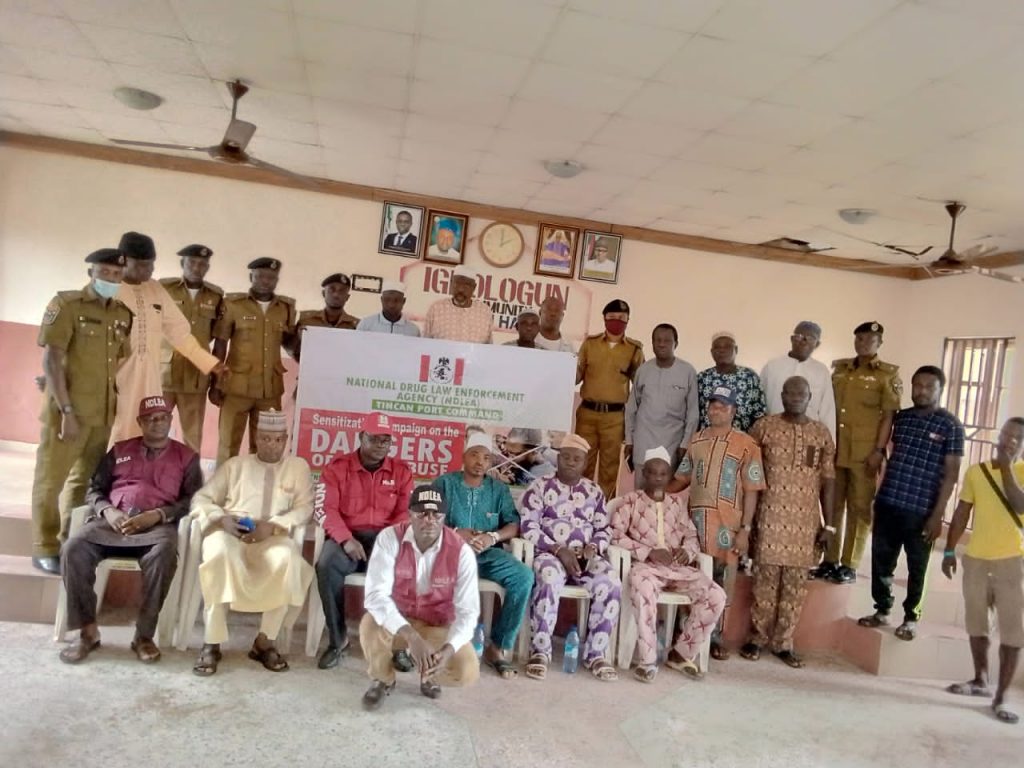 “So, right from the inception, we realise that  in our own community, in other to deal with the situation we must partner with everyone.”

Abubakar highlighted that the NDLEA especially the  Tin Can Island Area Command considers the Snake Island community very important to its own activities. 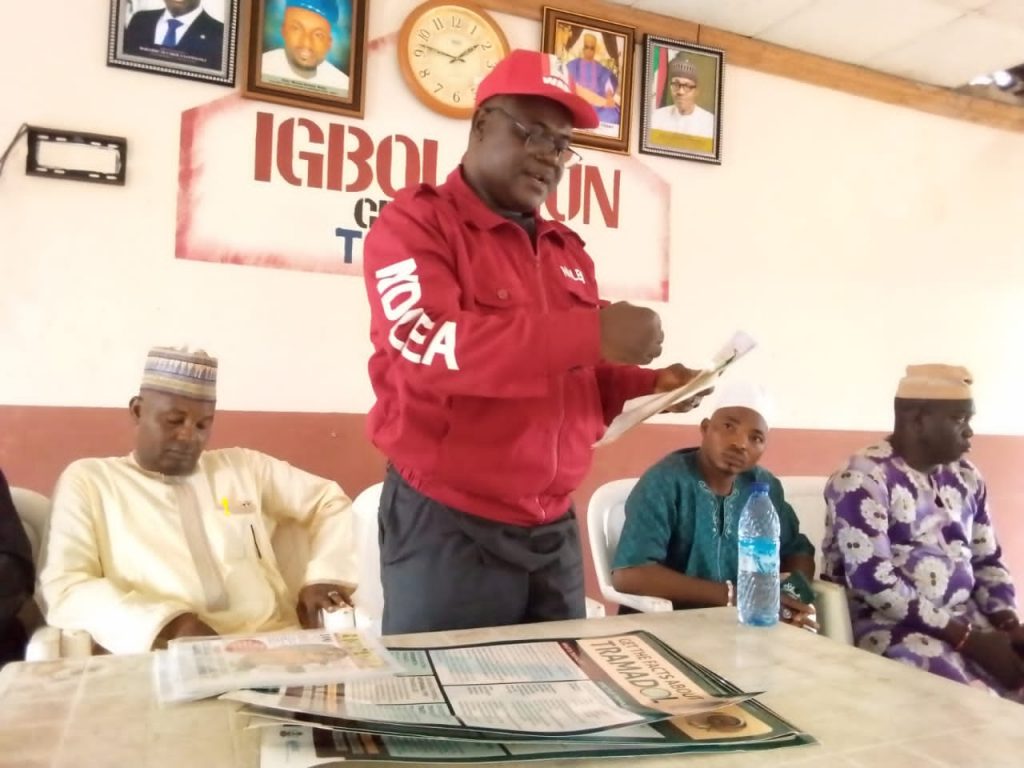 “I believe all of us as parents, as citizens, and even as individuals,  are all concerned about our own well-being. and when we talk about the issue of drugs there is an issue which bothers on all aspects of our own living, especially our own kids.”

He pointed out the importance of partnering with the Baale, his High Chiefs, and opinion leaders in youth groups in the community for all to understand the dangerous effects and menace of drug trafficking and abuse to the society.

According to the controller, Igbologun is an island that is isolated away from the main community of Lagos State which from experience can be used by some barons who are running drugs, especially syndicates from Nigeria to Ghana, Ghana back to Nigeria.

He added that normally because of patrols around the waterways barons l use communities strategically located such as Igbologun to warehouse their drugs and later on be taking them bit by bit to the main society.

Abubakar enjoined the villagers to inform NDLEA of any case of drug trafficking and barons in their midst, charging them not to hesitate in reporting such cases for arrests to be made.

“Also, if there are some people who have started to be experiencing these drugs then they can go for help because the help is already there”, he stated.

The Baale and head of the community, Chief Adam Lateef Oluwo, in his response said Igbologun community is under Amuwo Odofin Local Government Area.

Chief Oluwo lauded the visit of NDLEA to the community for sensitization on the side effects of illicit drug trafficking and abuse.

He also promised support of the entire community to NDLEA in its efforts to rid the society of illicit and drug trafficking menace.

In his own address, Ashiru Abdullai, Commander of Operations and Intelligence disclosed that it was the fourth time to visit the community where some community members were decorated with WADA emblem.

He explained that the decoration means that they were part of the War Against Drug Abuse.

He however noted that the badges they were decorated with have not been seen on any of them, saying that it is supposed to be worn at all times to pass the message of WADA always.

Abdullahi implored members of the community to assist the government in waging the drug war, adding that just as the controller has said, if they notice any bad egg among them, they should not hesitate to report the person to the agency for such person to be arrested.

He assured that once such people are arrested,  they won’t be seeing them for a very long time.

The commander advised members of the community not to mistake the benevolence of drug barons for generosity because the cargo they are trading in is dangerous to human life and the economy.

“This is because anybody who is addicted to drugs becomes a danger to himself and to his own society, and at the end of the day he becomes useless to everyone.

‘If not because of lack of light, we would have come with a projector and some videos to show some short films to show what drug is doing to such communities across the world, not only here in Nigeria but across the globe. I know of a documentary done in Mombasa in Kenya recently. Another one done by BBC here in Nigeria, Kano in particular concerns the young people who have been rendered useless by the abuse of drugs.

“There are helplines which is 24-hour none stop all through the week.  You can call to lay complaints. It comes with Hausa, Yoruba, and Ibo languages to choose from to make it easier for all to relate with,” the commander stated.