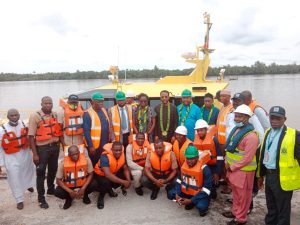 The Nigerian Ports Authority (NPA) is seeking an out-of-court settlement with the contractor dredging the Calabar channel.

The NPA Managing Director, Mr. Mohammed Bello-Koko, made the disclosure when he paid a visit to the Calabar Port Complex.

According to him, dredging the channel is a priority of the authority.

“The contract for the dredging of the Calabar channel was awarded many years ago but there is litigation between the Nigerian Ports Authority and the contractor.

“This has inhibited our ability to dredge the channel.

What we have done in recent times is to start looking for an out-of-court settlement.

“The authority, working with the Federal Ministry of Transportation and the Ministry of Justice, has resumed discussions in terms of how to settle this out of court, either to return the same contractor to continue dredging or appoint another company.

“This has been delaying the dredging of that channel, we have taken it very seriously, it is one of the reasons we are here today,” he said.

The managing director added that the visit was to enable NPA management to meet with stakeholders and reassure them that the Federal Government was taking necessary steps to ensure the dredging of the channel.

On business traffic to Calabar, Bello-Koko said that the authority was aware of some limitations on the channel but believed that there would still be imports that would go to Calabar.

“We have been discussing with shipping companies and consignees; so, we will locate major importers and encourage them to use Calabar,” he said.

The NPA boss noted that a vessel recently berthed at the port through the efforts of the port manager and NPA management.

He gave the assurance that more efforts would be made to make the eastern ports more active.

Bello-Koko said that NPA engineers had done a conditional survey of the depth of pile in Calabar Port and other eastern ports to determine how decayed the quays were.

He said that it would lead to decisions on whether it would be constructed or replaced.

“Modernisation of the port is holistic, it is not just about TinCan or Apapa.

“We are talking about holistic modernization of all the ports owned and operated by the NPA,” he said.

At the Ecomarine Nig. Ltd., Bello-Koko said that any concession by the authority must bring a positive change, adding that NPA  would do its best to get Calabar Port functional.

“We have a tug that is supposed to come here, we wanted it to come together with marine vessels that we imported so there will be another tug that will ease the problem being experienced,” he said.

At the palace of the Obong of Calabar, Bello-Koko appealed to him to encourage his subjects to protect equipment and buoys for navigation on waterways.

“I have come to thank you for your support and cooperation that we have been getting from the community and to intimate you of our activities that will bring more economic activities to the society and the kingdom,” he said.

Responding,  Obong of Calabar, Edidem Ekpo Okon Abasi Otu V, said that waterways had been serving as highways to the community.

He said that the community had been taking care of them.

“Unfortunately, activities there were killed. We have been crying for sometime and we believe that the game-changer, as he is being called, will make the change for us.

“I appeal that this should not be political but critical.

Do something to ensure that things work well for us,” the royal father said.

Mr. Utan Uye Utan, Operation Manager of Ecomarine, told Bello-Koko that it cost much to bring vessels to Calabar because of the challenge of getting vessels to berth.

He appealed to him to look into it.

In another development, the Calabar Port Manager, Mr. Festus Olumati, on Saturday said that the vessel traffic at the port complex between the months of January and May was 72.

Olumati gave the figure during the visit of the Managing Director, Nigerian Ports Authority (NPA) Mr. Mohammed Bello-Koko, to the Calabar Port.

The port manager said that between January and May 2022, vessel traffic into Calabar Port recorded high returns with a huge corresponding increase in the revenue of the authority.

“Cargo turn around time is four days per ship, with 16 container 24-foot Equivalent Unit (TEUs) and 15 per cent berth occupancy. 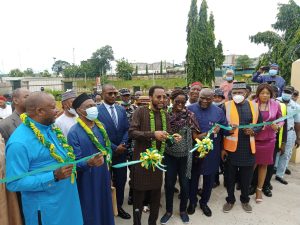 “From January to May 2022, our revenue growth earnings increased as follows: revenue generated in dollars, $6.6 million, while the actual revenue in dollars collected was $5.8 million.

He said that despite huge improvements, the Calabar Port was still faced with some growing challenges impeding the attainment of its full capacity as one of the fastest-growing ports in Nigeria.

He listed some of the challenges to include: Low depth of the Calabar Port water channel, which required full dredging, collapsed berth at the shoreline jetty, abandonment of Delta Queen Rig since 2012, and others.

Responding, Bello-Koko said that he would ensure that the berth occupancy, which stood at 15 per cent, be improved.

With regard to the issue of light and encroachment on the port land, he urged the port manager to ensure that whatever had been collected back be put to proper use, to avoid encroachment.

He congratulated the staff for the berthing of a vessel at the port, noting that it was a big feat, and also appreciated them for attaining the ISO certification.

“I hope we get to see that we don’t celebrate this after another year or month.

Management will work with you to ensure that it becomes a new normal in the port.

“Dear colleagues, it gives me pleasure to physically engage with you today.

“As you must have noticed from my several correspondences through email, we are committed to openness of communication between management and staff.

“Your opinion and idea matter to us and as such, we will appreciate constructive feedback from you through appropriate channels.

“The task of ensuring that our strategic intent to be the maritime hub for sustainable port services in Africa goes beyond mere rhetorics, it’s a collective one.

“This is why I expect that all hands should be on deck,” he said.

Bello-Koko stated that all hands being on deck would ensure not only to meet but also surpass stakeholders’ expectations and add greater value to the national economy.

The newsmen report that the Calabar Port Complex stands on the threshold of about 45 nautical miles, which is approximately 83 kilometers, comprising the Old Port, the New Port, and the Dockyard.