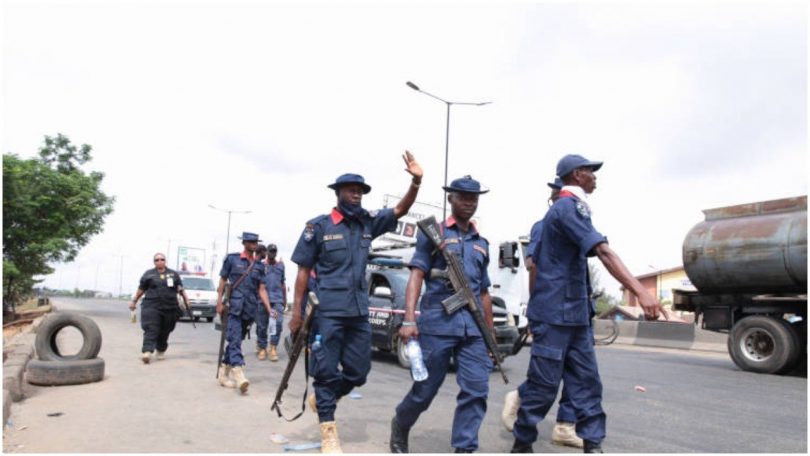 The Nigeria Security and Civil Defence Corps (NSCDC) Command in Kwara has arrested one Bello Muhammed, 28, for allegedly kidnapping and sexually assaulting his 15-year-old victim while in captivity.

This command’s Spokesman, Mr Babawale Afolabi, disclosed this in a statement which was made available to the newsmen in llorin on Tuesday.

Afolabi said the suspect conspired with two others still at large to kidnap the 15-year-old girl from llale village of Oke Ero in Irepodun Local Government Area of the state.

The spokesman stated that the suspects dragged the victim to the bush, tied her hands and raped her severally.

“On August 5, one Yakubu Kelani, 50, came to the NSCDC office in Omu Aran to report the kidnapping of his 15-year-old daughter on her way to fetch water on July 29.

“The suspect was taken into the bush where she was reportedly raped severally by her abductors who later got in touch with her family, demanding N15 million ransom,” he said.

Afolabi further said that the victim’s family paid certain amount of money to the alleged kidnappers who later released the victim.

He said that one of the suspected abductors, Muhammed, was later picked up by local vigilante at Kara market, Ajase lpo, and handed over to the operatives of the NSCDC.

Th spokesman said that during interrogation, Muhammed confessed to committing the crime with his two accomplices who are still at large.

He named the two other suspects as Umar Abubakar from Ajase lpo and one Babuga, adding that operatives of the NSCDC were on the trail of the suspects.

“The state Commandant, Iskilu Makinde, has been briefed on the incident and he has ordered for immediate manhunt for the other two suspects,”.

The spokesman said the suspect would be charged to court at the completion of investigations.