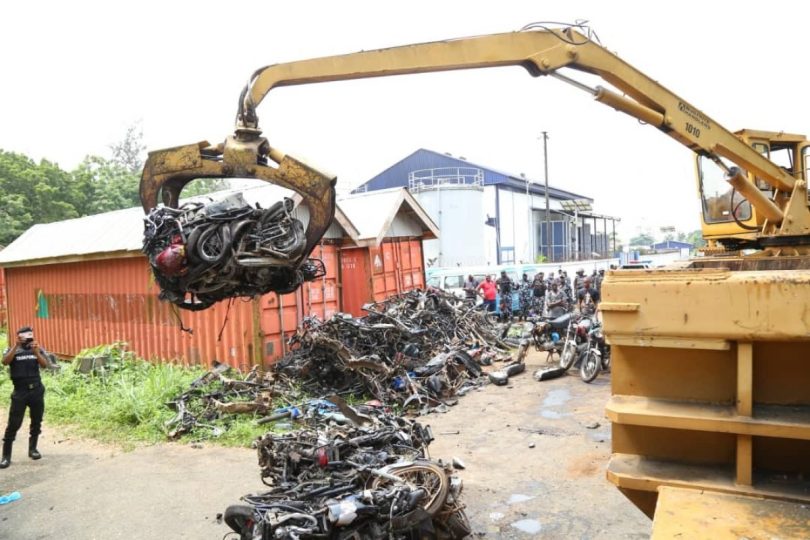 The Police Command in Lagos State said it arrested five persons and impounded 130 motorcycles at the Idi-Araba area of Mushin on Tuesday.

The command’s spokesman, SP Benjamin Hundeyin, confirmed the arrest on his Twitter handle on Tuesday.

Sources, however, told the newsmen that the arrest and seizures caused a skirmish between commercial motorcyclists and operatives of the task force on environmental offences, who were in the area to enforce the ban of okada on some roads.

The Lagos State Government on June 1, began the enforcement of banned motorcycle operations in some locations in the state.

The authorities had seized thousands of motorcycles, which were now being crushed publicly.

The spokesman said the motorcyclists couldn’t fight because the taskforce operatives went to Idi-Araba well prepared.

“They were just causing a scene after taskforce left with some of their impounded motorcycles.

“Our men from the Area Command have since been drafted there. Absolutely nothing to worry about.

” The Command assured residents in the area and other places of safety,” he said.

In the meantime, at least one person was killed, while another sustained serious injuries on Tuesday when a three-story building collapsed in Kano.

He said that the three-story building was under construction at the famous Kano textile market when it caved in.

Abdullahi said the NEMA rescue team was dispatched to the scene and was still combing the debris to rescue more persons that might have been trapped.

He assured that NEMA would investigate and ascertain the impact of the incident.