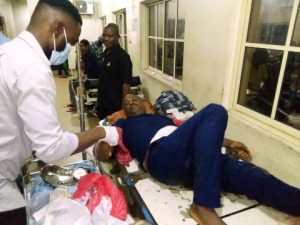 … As Police investigate dumping of dead baby in Nsukka***

The Nigeria Security and Civil Defence Corps (NSCDC), and the Nigeria Police have differed over a clash that led to sporadic gunshots fired at the NSCDC office on Monday.

The newsmen report that the incident left many residents and motorists scampering for safety.

Addressing newsmen on the development, the NSCDC Commandant in the state, Mr Michael Ogar, alleged that the incident was an attack on him and officers of the corps by the Nigeria Police.

Ogar said the incident was in connection with an earlier detained man, Nonso Ezenwanne, who claimed to be a policeman but with multiple identification cards.

He explained that his personnel had an altercation with Ezenwanne, following the disruption of his motorcade while returning from the scene of an inferno at an illegal oil bunkering site in the state on Sunday.

“As if that was not enough, he trailed us to Owerri and blocked my motorcade again, and brought out a pistol threatening to shoot us. but he was later disarmed and arrested.

“I had reached out to the former Acting Commissioner of Police, DCP Giwa, to identify the suspect which is the norm, but yielded no result as he said he had been transferred to Kaduna, and we could not find anybody to identify him.

“It was on my way to see MOPOL 18 Commander, just about 10 meters away from NSCDC office, I saw eight vehicles that blocked me and started shooting into the air and my vehicle.

“They dragged me out, flogged and bartered me, and later took me to their command where they continued to beat me with sticks and baton,” the Commandant claimed.

He said after about three hours, an Assistant Commissioner of Police in charge of Operations, later came to his rescue and took him home.

“I came back to my office to see the extent of damage, that was when I found out that two of my personnel got bullet injuries and were receiving treatment in the hospital.

While noting that his official car and some exhibits parked around the office vicinity were damaged, he added that the attackers also made away with his phones, pistol and AK 47.

“They accepted that the items were in their custody and that the matter will be resolved today.

“I told them that this incident is a disgrace to security agencies; I was surprised. I do not think we are here to flex muscles or pursue work ego but to defend our fatherland.

“I was highly disappointed and embarrassed by the action of MOPOL 18,” Ogar said, adding that the detained man was also whisked away by the attackers during the incident.

However, in a statement signed by the state Police Public Relations Officer, Mr Mike Abattam on Tuesday, he described the incident as an “unlawful arrest and detention/serious assault occasioning harm on a police superintendent by the NSCDC personnel.”

Abattam said Ezenwanne, a Mobile Police officer and the Armament Officer of No. 18 Mobile Police Force, Owerri, was driving to Imo Police Command Headquarters on an assignment but encountered a traffic jam.

He said: “While the officer was trying to make way for himself, the Civil Defence Personnel appeared from the rear, hit the Police officer’s vehicle violently, shouting and ordering him to remove his vehicle from the road.

“He replied the civil defense officer that he was equally trying to see how he could get out of the traffic, only for the officer to slap him hard on his face, calling him a stupid man.

“At that point, he alighted from his vehicle and introduced himself as a Police Superintendent serving at Police Mobil Base, Owerri.

“It was as if he angered him the more, he gave him another slap and others joined in beating him.

“The police officer then brought out his phone to call to his commanding officer, but they seized the phone, rushed into their vehicle and zoomed off,” Abattam also alleged.

He said the police officer managed to follow them to their office to demand for his phone, but his request was turned and he was instead locked up in a cell after seizing his service pistol.

“Because of his sensitive office, his disappearance became alarming to every office in the base and it became a suspected case of kidnapping.

“Hence, a search party was organised, and when all efforts to trace his whereabouts proved abortive, his phone was tracked and it led the team to the civil defence headquarters, Owerri.

“On arrival, the team of Policemen made inquiries to confirm if there was any Police officer in their custody, but they became hostile, ordering the Police officers to leave or they will shoot them.

“When the Police insisted, they started shooting into the air,” he said.

According to him, the Mobile Police Officers sensing danger, used tear gas, a minimal force, to defend themselves, which sent the NSCDC personnel scampering for safety.

The Police spokesman claimed the detained officer was rescued gallantly from the NSCDC custody, leaving nobody hurt or injured.

“It is pertinent to mention here that in the ethics of service, whenever a member of the force is arrested by any security agency, it is mandatory that the Police command is immediately informed, which is the standard practice.

“It is laughable that a very senior Police officer of the rank of a superintendent, was arrested and detained for more that 24 hours by the civil defence, and the commandant never deemed it necessary to inform the Commissioner of Police as required by law.

“Moreso, when the victim pleaded with them to allow him to put a call to his commanding officer or the commissioner of police,” he said.

Abattam said that Ezenwanne was on admission at the Police Medical Centre, Amakohia, in Imo.

He reiterated the call by the Commissioner of Police in the state, Mr Mohammed Barde, for residents of the state to remain calm and go about their lawful businesses without any fear of harassment.

He also added that Barde had directed the Deputy Commissioner of Police in charge of the State Criminal Investigation Department (SCIID), to commence a detailed investigation into the cause of the incident.

Abattam promised that at the conclusion of investigation, the outcome would be made public.

In the same vein, the Police Command in Enugu State has begun investigations into the lifeless body of a newborn baby dumped on a roadside in Nsukka.

The newsmen report that the body of the dead baby was discovered at the middle of the road by Old Motor Park, in Nsukka Local Government Area of Enugu State.

The Police Public Relations Officer (PPRO) of the command, Mr. Daniel Ndukwe, confirmed the incident in a statement on Tuesday in Nsukka.

He said that the investigation was to fish out the perpetrator(s) of the crime.

“Investigation has commenced to fish out the person/s that dumped a newborn baby in a carton in Nsukka town.

“The lifeless body of the baby was moved to a hospital by police operatives and was confirmed dead by doctors on duty.

“Further development will be communicated to the public,” Ndukwe said.

Meanwhile, a driver in the area who pleaded anonymity told newsmen in Nsukka on Tuesday that the dead baby was discovered around 6.20 a.m.

He said that a passenger who wanted to cross the road to board a bus saw the newborn baby in a carton and raised an alarm.

“I was loading passengers on my commercial bus around 6:20a.m when someone shouted see a baby in a carton.

“This shout attracted the attention of people around, who rushed to the scene.

“It appears the baby was dumped there last night and might have died of cold because it rained on Monday night,” he said.

The driver said police later came around 9.35 a.m to carry the baby.

“Some women are wicked; how can a woman after carrying a pregnancy for nine months have the mind to put the baby in a biscuit carton and dump him on the road after delivery.

“Even if she feels she has no money to take care of the baby, she should have taken him to a Motherless Babies’ Home,” he said.