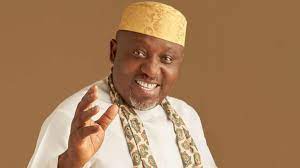 Former Gov. Rochas Okorocha of Imo, on Tuesday, urged the Federal High Court, Abuja, to make an order setting aside the seizure and sealing of some of his property by the state government.

Okorocha also asked Justice Ahmed Mohammed to restrain the defendants from investigating him or implement the recommendations of the seven panels set up to probe him while he served as the state governor between June 2006 and May 2019 pending the hearing and determination of the substantive suit.

The request was contained in a motion on notice brought by his lawyer, Oba Maduabuchi, SAN, dated and filed on June 25.

The newsmen report that Okorocha, Senator representing Imo West Senatorial District, in a suit marked FHC/ABJ/CS/558/2020 filed on May 28, 2020, had urged the court to restrain the Economic and Financial Crimes Commission (EFCC) and others from probing him.

While the EFCC is the 1st respondent, the 2nd to 48th respondents are the Attorney General (AG) of Imo and members of the seven panels set up to probe previous administrations in the state.

However, only the EFCC was represented in court on Tuesday.

Maduabuchi told the court that the latest application sought a restoration of the status quo despite the white paper issued by the state government panels.

The senior lawyer said despite the service of the motion on the 2nd to 48th defendants, none of them appeared in court.

According to him, one is not surprised about their absence in court because that has been their attitude.

“It is surprising that the attorney general of the state, who was served processes in the suit since last year, has not filed anything,” he said.

Maduabuchi informed that immediately an order of stay of proceedings against the panels was granted by the court, the state government panels quickly accelerated their proceedings and concluded their findings.

“Copies of the white paper issued by the panels were exhibited in the application,” he said.

The lawyer said the anti-graft agency had always been in court and had since filed its defence.

“For the attorney general and the panels, we can go to hell.

“But I know my lord is not completely powerless,” he said.

Counsel to the EFCC, G.C. Ofulue, did not oppose Maduabuchi’s application.

Justice Mohammed adjourned the matter until July 15 for hearing in the plaintiff’s motion on notice.

He also ordered that hearing notices be issued to the 2nd to 48th defendants.

Others are Plot 5 Naze Residential Layout and all property contained in pages 226 to 272 of the government white paper on the Florence Duruoha Igwe judicial Commission of inquiry into land Administration in Imo State from June 2006 to May 2019.