Nigerian Railway workers under the aegis of the Nigeria Union of Railway workers have strongly condemned the vapid and uninspiring attitude of the federal government to end the lingering face-off between it and the Unions of Universities, Polytechnics, Colleges of Education, and Research Institutions especially on the government’s no work no pay policy on the striking workers of the universities and other tertiary institutions.

Consequently, the workers tasked the federal government to meet the legitimate charter of demands of the Academic Staff Union of Universities (ASUU) with no further delay and save the nation’s education sector from total collapse.

“The federal government should be responsible enough to end the ongoing ASUU strike and rescue millions of Nigerian schooling youths who are majorly the children of the working class and poor masses from ruins and tempestuous engagements”, the Nigerian Railway workers stated in a statement issued by Comr. Innocent Luka Ajiji and Comr. Segun Esan, the union President General, and Secretary-General, respectively.

“The federal government should always remember that an idle hand is the devil’s workshop. 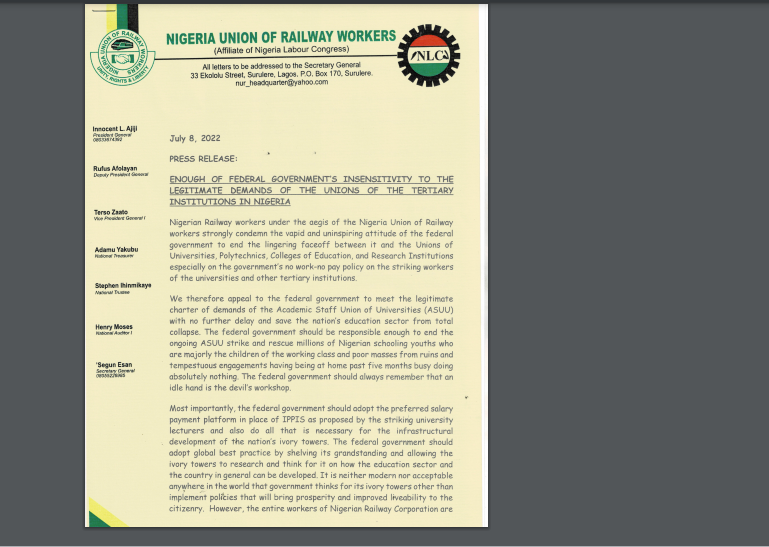 “Most importantly, the federal government should adopt the preferred salary payment platform in place of IPPIS as proposed by the striking university lecturers and also do all that is necessary for the infrastructural development of the nation’s ivory towers.

“The federal government should adopt the global best practice by shelving its grandstanding and allowing the ivory towers to research and think for it on how the education sector and the country, in general, can be developed.

“It is neither modern nor acceptable anywhere in the world that government thinks for its ivory towers other than implement policies that will bring prosperity and improved livability to the citizenry. 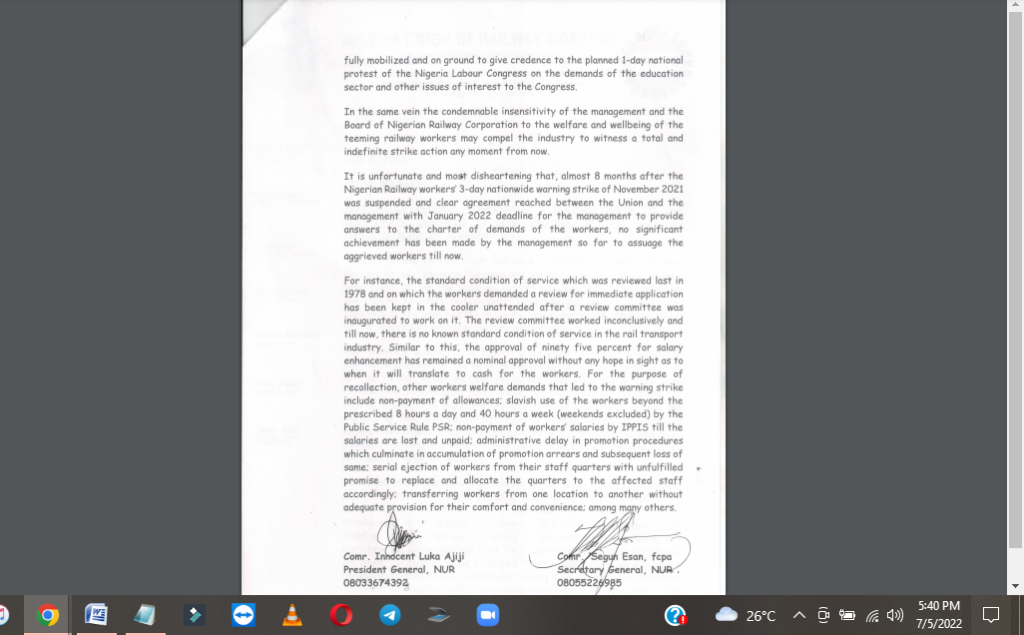 “In the same vein, the condemnable insensitivity of the management and the Board of Nigerian Railway Corporation to the welfare and wellbeing of the teeming railway workers may compel the industry to witness a total and indefinite strike action any moment from now.

“It is unfortunate and most disheartening that, almost 8 months after the Nigerian Railway workers’ 3-day nationwide warning strike of November 2021 was suspended and clear agreement reached between the Union and the management with January 2022 deadline for the management to provide answers to the charter of demands of the workers, no significant achievement has been made by the management so far to assuage the aggrieved workers till now.

“For instance, the standard condition of service which was reviewed last in 1978 and on which the workers demanded a review for immediate application has been kept in the cooler unattended after a review committee was inaugurated to work on it.

“The review committee worked inconclusively and till now, there is no known standard condition of service in the rail transport industry. Similar to this, the approval of ninety-five percent for salary enhancement has remained a nominal approval without any hope in sight as to when it will translate to cash for the workers”, the Union leaders stated.

They called attention to other workers’ welfare demands that led to the warning strike including non-payment of allowances; slavish use of the workers beyond the prescribed 8 hours a day and 40 hours a week (weekends excluded) by the Public Service Rule PSR; non-payment of workers’ salaries by IPPIS till the salaries are lost and unpaid; administrative delay in promotion procedures which culminate in accumulation of promotion arrears and subsequent loss of same; serial ejection of workers from their staff quarters with unfulfilled promise to replace and allocate quarters to the affected staff accordingly; transferring workers from one location to another without adequate provision for their comfort and convenience; among many others.