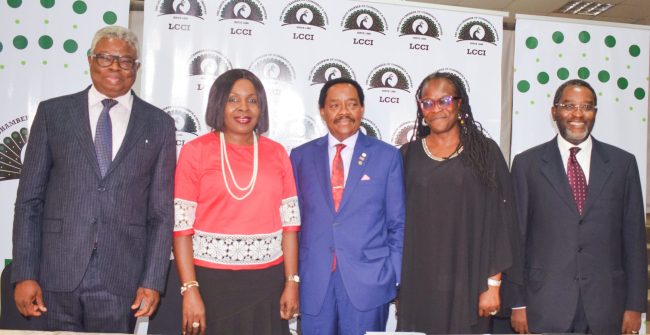 The Lagos Chamber of Commerce and Industry (LCCI) says the persisting Russia-Ukraine war will trigger shocks in the manufacturing and agricultural sectors in the second quarter of 2022.

Dr Michael Olawale-Cole, President, LCCI, said this at the LCCI Quarterly press conference on the state of the Nigerian economy on Tuesday in Lagos.

Olawale-Cole said the ongoing war triggered a positive oil price shock with spillover effects on operating costs, raw materials, and inflation in countries not directly engaged in the war.

The LCCI president stressed that should the conditions persist, production volumes would be impacted by the raw materials supply chain disruptions, the rising cost of diesel, and other internal security crises.

“Job losses are also very likely due to constrained production and disrupted supply chains and all of these will likely depress growth potential in Q2 2022.

“These may continue to present as headwinds to the sector’s performance.

“Additionally, with the war in Ukraine aggravating disruptions to supply chains of raw materials like wheat, barley, soybeans, sunflower, and corn, the rising cost of production may not abate soon,” he said.

Looking forward to the second quarter, he said Nigerians should expect headline inflation to remain elevated.

This, he said, would be due to supply chain disruptions caused by the Russia-Ukraine war, food supply shocks, FX policies, higher energy costs, FX illiquidity, and heightened insecurity in major food-producing states, which would continue to mount pressure on consumer prices.

“We believe a broad-based harmonisation of fiscal and monetary policies toward addressing the identified structural constraints will significantly help moderate inflationary pressure in the short term,” he said.

Olawale-Cole urged the government to adopt the most sustainable solution of boosting local production of food staples to levels that met local demands.

In addition, the industrialist tasked the government to resolve the lingering fuel supply crises by increasing importation to meet growing demand, which was putting pressure on diesel and fuel prices.

“It has also become imperative now that Nigeria needs to have reserves for these critical commodities to meet sudden crashes in supply.

“We have always advocated the removal of fuel subsidies and that such rescued funds be diverted to subsidise the production of goods and services in the face of the rising cost of manufacturing.

“The Central Bank of Nigeria (CBN) should embark on easing the economy while keeping a tab on controlling rising prices.

“Credit to the private sector should increase and be targeted to support growth sectors and export-promoting sectors.

“Deliberate efforts toward making the business environment more conducive for MSMEs and large corporates at the national, subnational, and local government levels are also very imperative,” he said.

On the energy sector, the LCCI president noted that the national grid was unable to continue to supply sufficient power to meet the country’s electricity demand.

Olawale-Cole recommended that the government should invest more in technology to fight pipeline vandalism and fund critical infrastructure and special purpose intervention in the power sector,” he said.

In the meantime, the World Trade Organisation (WTO) says the war in Ukraine has created immense human suffering, but it is also putting the fragile recovery of global trade at risk, and the impact will be felt across the planet..

“Smaller supplies and higher prices for food mean that the world’s poor could be forced to do without.

This must not be allowed to happen,” Ms Ngozi Okonjo-Iweala, the WTO Director-General said on Tuesday.

The war is taking place as other factors impact global trade, including the latest COVID-19 lockdowns in China which are again disrupting maritime trade just as supply chain pressures appeared to be easing.

Okonjo-Iweala urged governments to work with multilateral organisations like WTO to facilitate trade.

“In a crisis, more trade is needed to ensure stable, equitable access to necessities.

Restricting trade will threaten the wellbeing of families and businesses and make more fraught the task of building a durable economic recovery from COVID‑19,” she said.

World merchandise trade volume is expected to grow just three per cent in 2022, down from the previous forecast of 4.7 per cent, and 3.4 per cent in 2023, though these figures could be revised given the uncertainty surrounding the conflict.

The Russian invasion began on February 24 and WTO said the most immediate impact of the war has been a sharp rise in commodity prices.

Both Russia and Ukraine are key suppliers of essential goods such as food, energy, and fertilizers, supplies of which are now threatened.

Given the scant data on the economic impact of the conflict, WTO economists have had to rely on simulations for their assumptions about global Gross Domestic Product (GDP) growth through 2023.

Their estimates capture the direct impact of the war, including destruction of infrastructure and increased trade costs; the impact of Russian sanctions, including blocking Russian banks from the SWIFT international banking payments system; and reduced aggregate demand in the rest of the world – in part due to rising uncertainty.

WTO said world GDP at market exchange rates should increase by 2.8 per cent this year, or 1.3 percentage points down from the previous forecast.

Output growth should rise to 3.2 per cent in 2023, “assuming persistent geopolitical and economic uncertainty”, which is close to the 3.0 per cent average rate for the period 2010-2019.

In the Commonwealth of Independent States (CIS) region — created after the dissolution of the Soviet Union in 1991, and which excludes Ukraine — GDP is expected to drop 7.9 per cent, leading to a 12 per cent decline in imports.

However, exports should increase by nearly five per cent as other countries continue to rely on Russian energy.

“If the situation were to change, we might see stronger export volume growth in other fuel producing regions,” said WTO.

Given the current GDP assumptions, the agency has projected that merchandise trade volume growth this year could be as low as 0.5 per cent or as high as 5.5 per cent.

World merchandise trade volume grew roughly twice as fast as world GDP in the two decades before the 2007-2008 global financial crisis.  The ratio fell to around 1:1 on average in the wake of the crisis.

If the current forecast plays out, it suggests there will be no fundamental change in the relationship between trade and output.

“Risks to the forecast are mixed and difficult to assess objectively.

“There is some upside potential if the war in Ukraine ends sooner than expected, but substantial downside risks could emerge if fighting persists for a long time or if the conflict escalates,” WTO stated.

The trade forecast was released together with annual merchandise and commercial services trade statistics.

The volume of merchandise trade, measured by the average of exports and imports, rose 9.8 per cent in 2021, with the value growing 26 per cent to 22.4 trillion. dollars

Commercial services trade, which includes the transport sector and covers container shipping and the passenger airline industry, was also up 15 per cent in 2021, reaching 5.7 trillion dollars.

Though trade in the travel sector was positive overall, they figures remained weak, as COVID-19 restrictions were only partially eased during the year.

WTO said western sanctions on Russian businesses and individuals are likely to have a strong effect on commercial services.

In another development, the UN on Tuesday warned that the fallout from the war in Ukraine could dramatically worsen the economic outlook for developing countries already grappling with debt financing related to the COVID-19 pandemic.

UN, in a report published on Tuesday, stated that while rich nations were able to support their pandemic recovery with record sums borrowed at ultra-low interest rates, the poorest countries spent billions servicing debt, thus preventing them from investing in sustainable development.

COVID-19 pushed 77 million more people into extreme poverty in 2021 while many economies remained below pre-2019 levels, according to the” Financing for Sustainable Development Report: Bridging the Finance Divide.” report.

Furthermore, it is estimated that one in five developing countries will not see their Gross Domestic Product (GDP) return to 2019 levels by the end of 2023, even before absorbing the impacts of the Ukraine conflict, which is already affecting food, energy, and finance across the globe.

The report was produced by the UN Department of Economic and Social Affairs (DESA) together with more than 60 international agencies, including within the UN system, and international financial institutions.

UN Deputy Secretary-General Amina Mohammed described the findings as “alarming”, given that the world is at the halfway mark for financing the Sustainable Development Goals (SDGs).

“There is no excuse for inaction at this defining moment of collective responsibility, to ensure hundreds of millions of people are lifted out of hunger and poverty.

“We must invest in access for decent and green jobs, social protection, healthcare and education leaving no one behind,” she said.

The report reveals that on average, the poorest developing countries pay around 14 per cent of revenue for interest on their debt, while the figure is 3.5 per cent for richer nations.

The pandemic forced governments to cut budgets for education, infrastructure and other capital spending.

Fallouts from the war in Ukraine – such as higher energy and commodity prices, as well as renewed supply chain disruptions – will only exacerbate these challenges and spark new ones.

The war is also likely to result in further increases to debt distress and increased hunger, further widening “pandemic recovery gaps” that existed before the conflict.

Liu Zhenmin, the DESA chief, pointed to a potential silver lining for the way forward.

“The developed world proved in the last two years that millions can be lifted out of poverty by the right kind of investment – in resilient and clean infrastructure, social protection or public services.

“The international community must build on that progress, and ensure developing countries can invest at similar levels, while reducing inequality and securing a sustainable energy transition,” he said.

The past year was also marked by some advances in poverty reduction, social protection and investment in sustainable development, driven by actions in developed countries and some large developing nations, including some 17 trillion dollars in COVID-19 emergency spending.

However, 13 governments also cut this support to developing countries, and the record sum is still insufficient to meet the vast needs.

The UN fears that increased spending on refugees in Europe, another fallout of the war in Ukraine, could lead to cuts in aid to the world’s poorest countries.

To bridge the “great finance divide”, the report calls for countries to urgently address financing gaps and rising debt risks.

This can occur through several measures, such as speeding up debt relief and expanding eligibility to highly indebted middle-income countries.

“It would be a tragedy if donors increased their military expenditure at the expense of Official Development Assistance and climate action.

“It would be a tragedy if developing countries continue to default, at the expense of investments in social services and climate resilience,” Mohammed said.