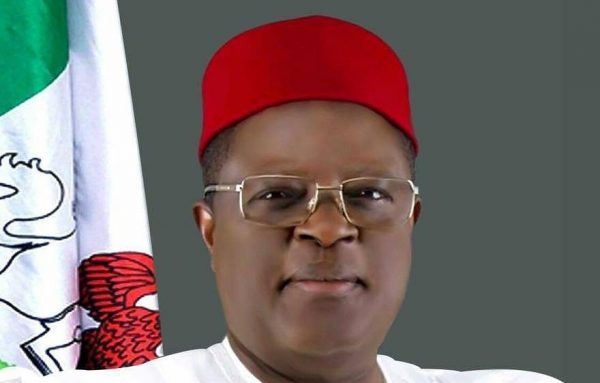 The embattled Governor of Ebonyi State, David Umahi on Tuesday warned that he would not vacate the Governorship seat for anyone, despite a competent Court declaration, which sacked him, for joining APC, from PDP.

A Federal High Court sitting in Abuja on Tuesday sacked the governor and his Deputy, Dr Kelechi Igwe for defecting to the All Progressives Congress (APC) from the Peoples Democratic Party (PDP).

Umahi, who described the judgement as a ‘sham’, accused the Presiding Judge, Justice Inyang Ekwo of doing a hatchet job, even as he stressed that he remains the governor of the state.

“Nobody can remove me as the governor of the state as we know where the judgement came from.

“Justice Ekwo has more than 10 cases against the state government and we will see where this leads him,”.

The governor assured his supporters and the people of the state that he would complete his mandate.

“We have petitioned Ekwo before the National Judicial Council (NJC) as his continued stay on the bench is a disaster for the country.

“People should not panic as I, the governor, is not distracted at all,” he said.

He said that the development will not affect his presidential ambition, noting that his legal team would appeal the judgement.

“The constitution stipulates that the only way a governor can be removed from office is through death, resignation or impeachment by the state House of Assembly.

“There is no constitutional provision that empowers a hatchet man to turn the constitution or law of the land on its head.

“The Supreme Court’s recent judgement on Zamfara among others attests to this fact as I remain the governor of the state.