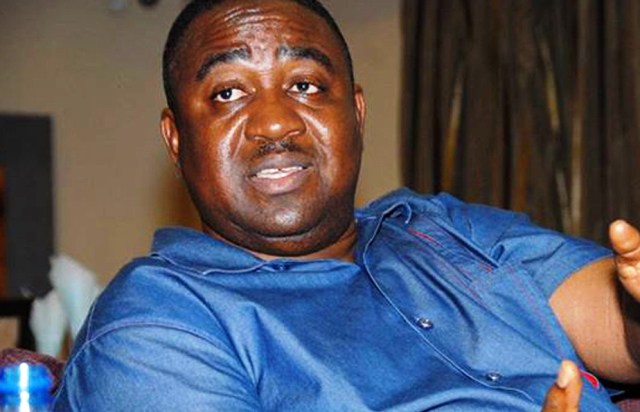 He applauded Gov. Udom Emmanuel for venturing into an area as unique as the coconut oil refinery to boost the state’s economy.

“The resources shared in Abuja are not enough.

You came, saw Akwa Ibom in a state of despair and left Akwa Ibom a prosperous state.

“What you have done in Akwa Ibom has not been done in Nigeria.

You are launching Akwa Ibom on a global stage,” Suswam said.

In his remarks, Gov. Emmanuel declared the refinery, known as St. Gabriel Coconut Refinery, as first in magnitude and level in Africa.

“In Akwa Ibom, we attracting foreign direct investment,” he said.

Emmanuel said the project came through his desire to open more windows for foreign direct investments.

He explained that a barrel of coconut oil goes for US$ 1,326, adding that the dwindling crude oil fortunes moved him to explore other economic possibilities, using available resources.

The Governor who disclosed the plan to commence an immediate training of indigenous hands to man the refinery said the facility has a daily capacity to crack one million coconuts.

Emmanuel said the factory would employ no fewer than 3,000 direct and indirect staff.

He pledged to plant two million more coconut stands before exiting office in 2023.

The newsmen report that the factory was flagged off on May 24, 2017, as St. Gabriel Coconut Oil Factory.

The factory is owned by the Akwa Ibom Government which commenced with the cultivation of 2 million stands of hybrid coconut seedlings on an 11-hectare piece of land.

“Other facilities within the complex include water treatment plants, effluent treatment plants and residential quarters for technical and managerial staff as well as parking areas for vehicles bringing raw materials.

In another development, FishNet Alliance, a network of fishers in several African countries, has called for a cautious approach to the planned introduction of Genetically Improved Tilapia fish into Nigeria.

The coalition stated that the ‘artificial’ variety, if allowed into Nigeria, would crossbreed and eventually lead to the extinction of the natural variety, thereby distorting the nation’s rich biodiversity.

It, therefore, appealed to the federal government to withhold regulatory approvals for the release of the artificially-altered fish variety until the biosafety concerns around it are addressed and regulatory authorities strengthened.

The group made its position known on Friday in a statement issued by Stephen Oduware, Coordinator of FishNet Alliance.

The alliance said the improved tilapia would be introduced following “an inclusive legal agreement” between WorldFish and Premium Aquaculture Limited through a programme on genetically improved farmed tilapia (GIFT).

It said that, according to the Nigerian Investment Promotion Commission, “This agreement will augur well for the establishment of GIFT-based aquaculture industry in Nigeria.

The group noted that Bill and Melinda Gates Foundation (BMGF) and the United States Agency for International Development (USAID) are collaborating with WorldFish and PAL on this endeavour.

FishNet said the aim of the collaboration is to have WorldFish/PAL GIFT tilapia in Nigerian fish markets by late 2023.

It expressed concerns that apart from the environmental and health challenges, it is unclear which agencies of government has a hand in the transaction.

“Improved Tilapia will not tackle the root cause of challenges in the fisheries sector in Nigeria.

Neither will it solve the hunger and malnutrition problems in the country.

“Indiscriminate activities of trawlers lead to overfishing of both target and non-target species of fish; destruction of the mangrove forests amongst other issues – are matters that government should focus attention on.”

“The genes used to improve the tilapia could have come from a variety of organisms, including other fishes, coral, mice, bacteria, or even humans.

“They are basically produced to suit industrial aquaculture models with doubtful regard for possible ecological and environmental concerns.

“Fish farming in Nigeria is done mostly close to the river or in the creeks and there are fears that there could be interactions between the “genetically improved” fish and their relatives in the wild.

“If such fish were genetically engineered, research has shown that releasing as little as 60 fishes into a wild population of 60,000 would lead to the extinction of the wild population in less than 40 fish generations.

“The implication of having genetically improved tilapia released into the wild is not known,” FishNet stated.

The alliance noted that a new study found that genetically engineered (genetically modified or GM) zebrafish (Danio rerio) had escaped from fish farms in Brazil and are multiplying in the creeks there.

FishNet Alliance quoted researchers as saying that their results “confirm that escapes from aquaculture facilities are common and could bring severe consequences to local fish populations, including endemic, rare, and threatened species.”

They concluded that the production of non-native species should be avoided and transgenic fish should be banned.

“The escape of Genetically-Modified fish from Brazil should be a big wake-up call for our Nigerian Regulators and Government,” FishNet quoted Mariann Bassey-Orovwuje, Coordinator of the Food Sovereignty Program with Friends of the Earth Nigeria and Africa, as saying.

The group recalled that in 2020, Friends of the Earth USA led advocacy against the incursion of genetically modified seafood.

Fishnet noted that Friends of the Earth USA released an updated list of 80 grocery retailers, seafood companies, food service companies and restaurants with more than 18,000 that declined to sell genetically engineered salmon.

FishNet also urged the Nigerian government to provide resources to public fisheries and oceanography institutions for the healthy management of the nation’s aquatic ecosystems and resources.