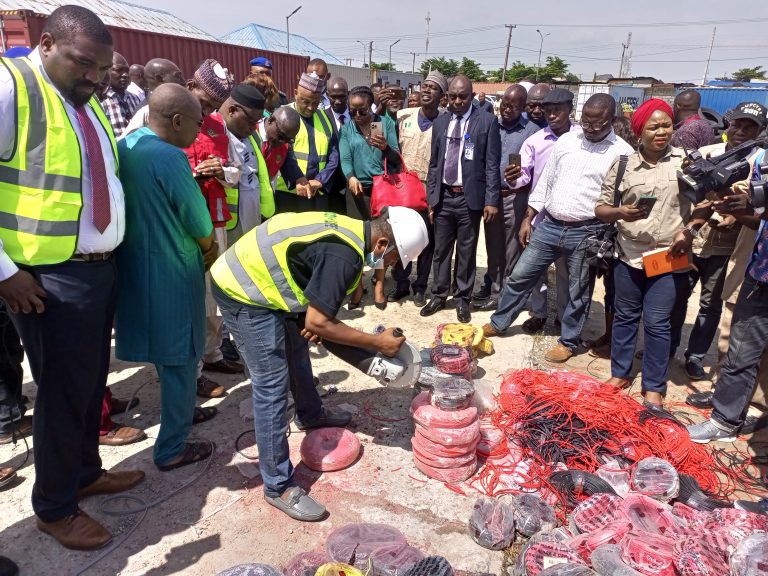 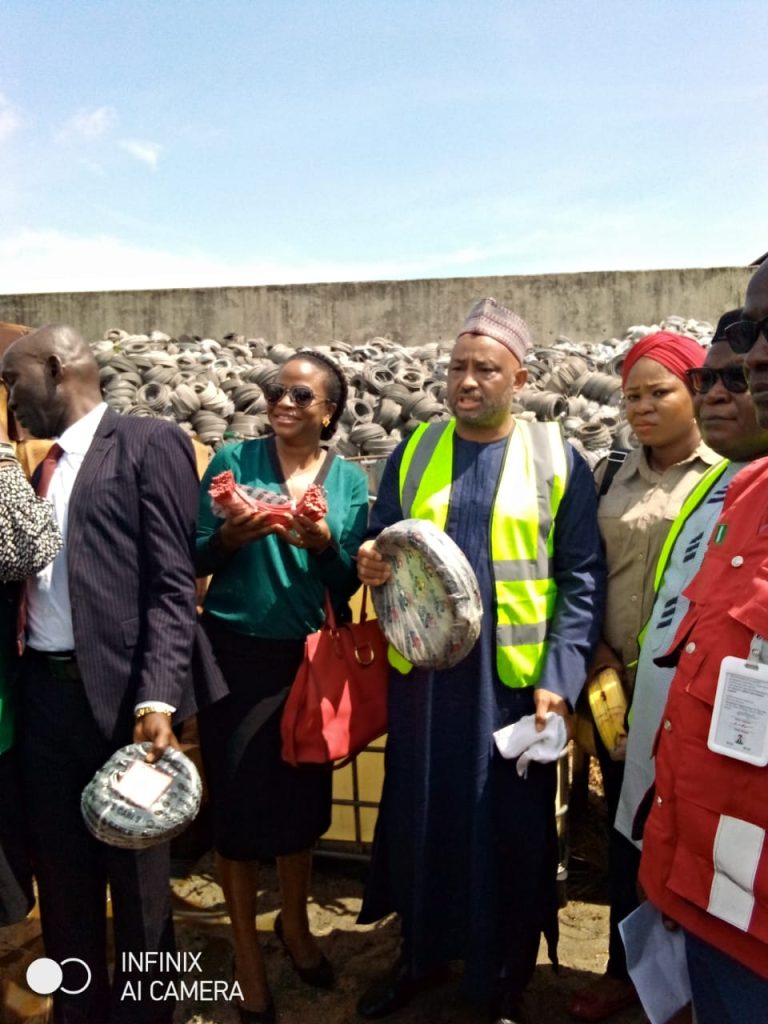 Nigerian Standard Organisation (SON) officials, showcasing Some of the substandard cables on Wednesday.

The Standard Organisation of Nigeria, SON on Wednesday, destroyed substandard and life-endangering products after obtaining a relevant court order against the importers of the products.

The Director-General/ Chief Executive, (SON), Mallam Farouk A. Salim confirmed this, while addressing the media on the dangers of substandard products.

“We are here to show Nigerians that we are not only working and confiscating substandard goods, but we are actually destroying those products after we got court orders or permissions from the people importing the substandard goods.

“We can see a mountain of cables in our background behind the journalists, roofing sheets, which I have already demonstrated earlier on, by cutting them with my bare hands.

“And we have lubricants that have been faked.

We have containers to show this.

We have gas cylinders that were used and smuggled into the country after repainting them, and they’re trying to sell them as new; and this kind of thing when people smuggled them, it is either the gas cylinder will explode or the roofing sheets will not even protect the owner of the house from rain or sun.

“See also the cable: this is the kind of cable that you use and it causes fire and the person will lose the hard-earned money expended to build the house; because the terrible thing you’ll hear is that the house is on fire.

“In the course of some of these things, lives are lost, properties are lost and that’s why the criminals perpetrating these activities must be brought to book.

“And these criminal activities you are seeing at my back here may also be sponsoring terrorism and separatism and banditry in this country.

So it is not just selling bad products and killing people.

It may be far beyond that.

“They may also be encouraging bad people to use the money and profits to attack us and destroy our country.

It is to avert such a serious issue that we must raise necessary awareness.

“This is just a small percentage of what is out there and SON will be continued working hard to make sure that these products are dealt with properly”, the Standard Organisation Boss stated further.

Talking about how many arrests had been made, the Director-General said: “We have made plenty of arrests; the person that was found during the fake lubrication is right now in jail.

A lot of individuals and groups are already in the process of being jailed.

“There’s a lot of people out there doing this business and we are working with limited resources to deal with them”, he said further, noting that the seized goods were worth billions of naira; and wondered why anyone would want another to go to market only to buy a gallon of engine oil, knowing how expensive it is, and yet buy fake.

He bemoaned the fact that some people are ready to see their fellow men mindlessly invest their scarce resources on fake or substandard items like cables, or cylinders, even as expensive as they presently are.

He was particularly concerned that the items involved run into several thousand, with a value running into several millions, if not billions of naira; and all of which were now slated for destruction.

Responding to the question on the appropriateness of the SON being in the port, the Director-General said the desire was mainly to boost the organization’s effectiveness at curbing the influx of substandard goods.

“We have been arguing for a long time that we need to be in the port.

All these products you are seeing here are products imported into Nigeria.

“They came through the port and they are smuggled out of the ports into the market.

If we are inside the port, definitely we would minimize the damage being done to this country.

“Most of these things you are seeing in the background, we seized them in the markets where they were already being sold to the customers”, he indicated, explaining that it would have been easier to swoop on them while inside containers within the port, rather than searching or hunting for them in different markets, when substantial fractions would already have been sold, to innocent people.

He blamed the situation on importers’ excessive zeal for profits, saying he could not fathom any other motive why an importer would involve himself in the selling of substandard products, except predominantly, to make more profits.

“It’s all about profits.

These people want to double their profits.

These people are into these nefarious activities in other to make more money, the DG affirmed.

The Chief Assistant Officer, Bisiriyu Adesewa, however, commended SON, noting that some of the products were recyclable.

“So, we have come to appreciate SON for what they are doing in ensuring that substandard products are not freely entering our market”, he said, seeking to know what would happen to some of the items, after their destruction. 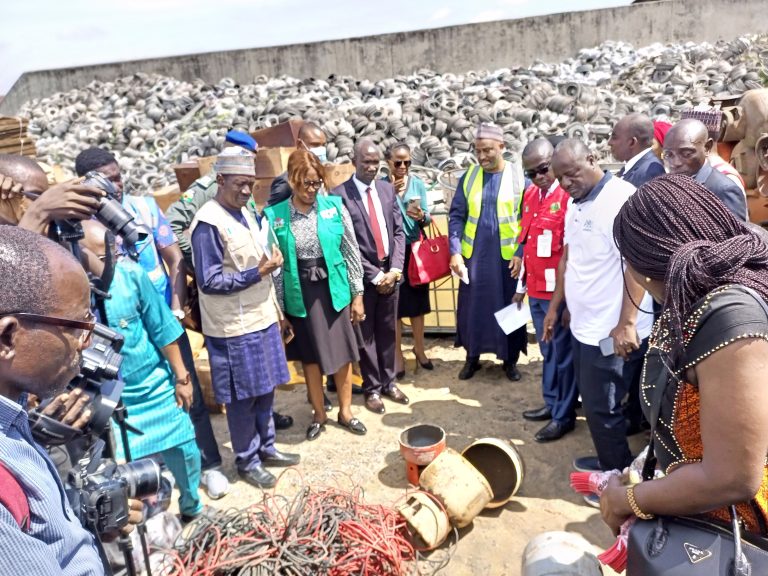 “They explained that most of them are going to the recycling companies, for I know that some of them are recyclable; and the only one that is not really recyclable here now, is the oil”, Bisiriyu indicated, suggesting a particular method that would result in a zero-waste.

Bisiriyu added “We also want to ensure that the operation culminates in a healthier and cleaner environment.

The destruction process should be in line with agreed regulations guiding this process.

And that should definitely begin, first with dismantling them, separating them, and sorting them out, which is what they have done.

The next thing is for it to be recycled.

Speaking in the same vane, Mr. Charles Amudipe, Head, Operations, Nigerian Copyright Commission, also made his contribution, saying: “We need to commend the efforts of the SON for what they are doing.

“These are counterfeited products and they are also intellectual property for someone.

To have brought these ones out of markets we should commend them.

Because at the end of the day the people that have designed these products and put them in the markets expect some level of economic gain in return.

But these activities are geared towards gaining something in return for their efforts.

“So in all, we the  Nigerian Copyright Commissions will appreciate the efforts being put into this markets of counterfeited products and also to give room and space for those people that own these intellectual properties to have economic gain in return.

Amudipe also noted: “Over the years there has been a strong synergy between Copyright Commission and Standard Organisation of Nigeria; for those copyrighted materials will be forwarded to us. We will investigate and we would also arrest and prosecute the offenders.”

The Chief Operating Officer, MICOM Cables while speaking said “So my visit here today has been an eye-opener, to see these things.

“We have been having several conversations with these companies about how to stop this menace in the society because a lot of us are of legacy companies.

We are in companies that have been in the system for decades.

My company now is 44 years and counting and we know the problem: this adulteration, this substandard items is truly a thorn in the flesh.