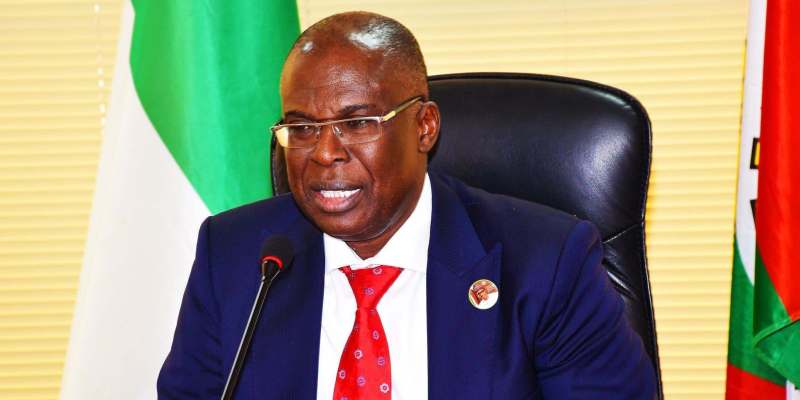 Sylva said such investments, which were underpinned by responsible policies that could ensure the achievement of net-zero carbon emission, were commendable and appreciated by the government and the good people of Nigeria.

The newsmen report that the minister gave the commendation at the official launch of `Seplat Energy Tree 4 Life Initiative’ on Tuesday in Abuja.

He noted that the Tree for Life Initiative programme was aimed at reducing carbon dioxide from the atmosphere.

“This is a commendable commitment towards net-zero Initiative.

Also in line with Mr President’s commitment on net-zero carbon emissions by 2060.

“This requires initiatives such as this being undertaken by Seplat, as well as sustained financial assistance, technology transfer and capacity building from international partners willing and able to assist us in this regard,’’ he said.

He said Nigeria still required fossil fuels, especially gas, as its baseload energy source to address energy poverty and power supply, adding that “gas was declared as our transition fuel, our pathway to net-zero carbon emission.”

According to him, there are also enablers and initiatives which support the realisation of the full potential of the gas sector.

He listed them to include the development of critical infrastructure and systems – Decade of Gas, Ajaokuta-Kaduna-Kano (AKK) pipeline, Nigeria/Morocco pipeline, Trans-Saharan Pipeline and the National Gas Transportation Network Code.

Okadigbo, in her remark, said it was commendable that Seplat embarked on the programme at a time the oil and gas sector was facing unprecedented challenges.

She said the industry for many years had been the mainstay of the Nigerian economy and the main driver of socio-economic development.

She described climate change as one of the most prominent challenges facing the industry presently, adding that it was imperative to enhance the critical role of oil and gas industry in addressing the issue.

Okadigbo said the Seplat Energy Tree 4 Life Initiative exemplified the way by which the industry could respond to climate emergencies.

“Tree planting is a simple and effective way to help reduce carbon emission and restore natural ecosystem,’’ she said.

The NNPC board chairman enjoined the operators and players in the sector to device a climate action strategy to remain relevant in the new dispensation.

She, however, listed some key elements in setting up a good climate action strategy including defining a baseline for certain climate change targets, identifying the most suitable initiative and defining man power required.

She added that access to capital should be taken into consideration as well as communication and stakeholder engagement, among others.

“More importantly, there should be aligning of goals with the energy transition and carbonisation agenda of the government,’’ she said.

The programme is in line with Sustainable Development Goals 13 on Climate Action which seeks to reduce greenhouse gasses and fight climate change.

It will boost food security and alleviate poverty through building, strengthening, and empowering communities to plant economic trees, which will provide food and fight hunger, without destroying the environment (SDG 2 – Zero Hunger).

In the meantime, Dangote Cement Plc on Tuesday said its revenue for the first quarter stood at N413.2 billion, translating to a 24.2 per cent increase over the same period last year.

The company said this in a statement signed by Mr Anthony Chiejina, Group Head, Corporate Communications, Dangote Group, in Lagos.

According to the statement, the company also recorded a profit after tax of N105.9 billion resulting in 18 per cent increase for the same period.

Analysis of the company’s three months results indicated that Dangote Cement sold a total volume of 7.2 Metric tonnes of cement.

It said its Nigerian operations accounted for 4.8 Metric tonnes, while the rest of Africa did the balance of 2.4.

He added that the company was ramping up production at its Okpella plant and was progressing well to deploy grinding plants in Ghana and Cote d’Ivoire.

“Dangote Cement is Africa’s leading cement producer with nearly 51.6Mta capacity across Africa and with a fully integrated quarry-to-customer producer, it has a production capacity of 35.25Mta in its home market, Nigeria.

“The Obajana plant in Kogi State, Nigeria, is the largest in Africa with 16.25Mta of capacity across five lines; Ibese plant in Ogun State has four cement lines with a combined installed capacity of 12Mta while Gboko plant in Benue state has 4Mta; and  Okpella plant in Edo state has 3Mta.

“Through recent investments, Dangote Cement has eliminated Nigeria’s dependence on imported cement and has transformed the nation into an exporter of cement serving neighbouring countries,” he said.