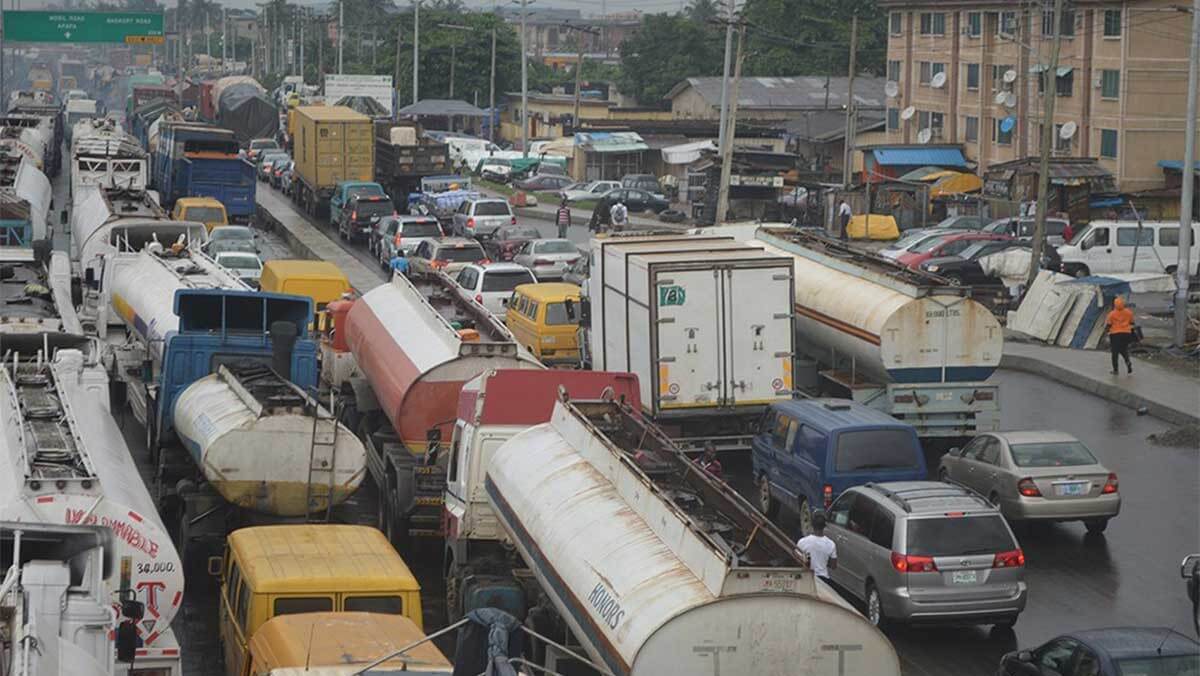 The National Association of Road Transport Owners (NARTO), has blamed the persistent trucks and tankers induced gridlocks in Apapa area of Lagos, to the absence of holding bay by actively operating tank farms, conservatively put at about 60.

The National Executive Secretary, NARTO, Mr Aloga Ogbogo made the observation in Lagos, on Wednesday.

Ogbogo who stated that each of the tank farms had the capacity to load between 100 and 150 tankers daily when products are available maintained that it was consistency of their operations that had been responsible for congestions ad gridlocks, particularly during loading.

“The Lagos ports are the collection point where vessels bringing petroleum products discharge to tank farms”, he indicated, pointing out that tankers and trucks were compelled to queue on both sides of the roads, because there are no holding bays.

“The vehicles had to queue up on roads in the area for the products since there are no holding bays to accommodate the loading trucks while waiting for their turns”, the NARTO scribe said, stressing that tank farms operators should be compelled to have holding bays where the trucks would park while waiting to load product.

According to him, the Department of Petroleum Resources (DPR) regulation mandated tank farms to have holding bays where trucks hibernate to load products before they move out.

“So, when you see trucks on the road queuing up, it is due to lack of holding bay to accommodate them at the depot,’’ he posited further, adding that the situation is exacerbated by the bad road network in the area.

He advised the Federal Government to concession the roads to the private sector for proper and constant maintenance.

“In advanced countries, government has no business in road construction, they are concession to the private sector to construct and for maintenance,’’ Ogbogo said.

Lagos State Sector Commander, Federal Road Safety Corps (FRSC), Hyginus Omeje, had said that the permanent solution to the Apapa gridlock was the establishment of holding bays to accommodate trucks and articulated vehicles before loading. Omeje insisted that this was the most viable option for putting an end to the perennial gridlock.

He said that all owners of tank farms should provide facilities that would accommodate trucks coming into their facilities to load.

“I think the traffic congestion problem in Apapa will be solved permanently if holding bays can be established to take trucks coming in to load.

“The stakeholders, with owners of tank farms, should begin to pay attention to having a holding bay that can contain some trucks before being called in to load,’’ he said.

Omeje said that government was trying to address the issue by bringing private investors to put up the facilities for the benefit of the residents.

He said that this was a fundamental issue that was needed to allow free flow of traffic within the corridor.

“We can have the private sector coming up with the parks that some of the trucks can easily move in and wait for loading instead of parking along the streets in Apapa, thereby causing hold ups.

“Through the process, the next truck to load in the tank farm will be called through electronic call-up system. This method will reduce the gridlock,’’ he said.

According to Omeje, the FRSC has partnered the Nigerian Ports Authority (NPA) to inspect all trucks coming into the port for business.

“We have had various meetings with the stakeholders, registered operators and NPA and we told them that it will not be business as usual if their trucks are not roadworthy.

“Beside, some of the articulated vehicles are overloaded, thereby causing traffic along the road.

“We want to ensure that our road transport safety standard schemes are implemented at the ports for every truck coming in to load,’’ he further said.

In the meantime, search and rescue operations around a stricken oil tanker off the Chinese coast were hampered by an explosion on Wednesday, the Chinese Transportation Ministry reported.

There were 32 crew members on board, believed to be 30 Iranians and two Bangladeshis.

As of Wednesday, rescuers had found only one body. The remaining crew members are still missing.

All 21 crew members of the freighter, who are Chinese nationals, have been rescued, according to the ministry.

The tanker has been on fire since the collision. Experts had earlier warned in the week that an explosion could be imminent.

The rescue operation includes eight Chinese ships, a South Korean ship and helicopter, and a P-8A aircraft belonging to the U.S. Navy.

Attempts to find the remaining crew members have been suspended following the blast, which reportedly happened while the rescuers were using foam to try to control the fire.

The Shanghai Maritime Safety Administration has drawn a 10-nautical-mile perimeter around Sanchi, where navigation is to be avoided.

The rescue efforts have also been hampered by bad weather and toxic gas emanating from the site.

The German Ambassador to Nigeria, Mr Bernhard Schlagheck has pledged to actively support the Institute for Peace and Conflict Resolution (IPCR),in a bid to strengthen peace building and other intervention platforms required to mitigate conflicts in Nigeria.

The IPCR Media Officer, Michael Abu highlighted this on Wednesday, saying that Schlagheck made the pledge in Abuja, when he visited the Director-General of the IPCR, Prof. Oshita  O.  Oshita.

Schlagheck while expressing concern over the spread of dysfunctional conflicts in the country, also indicated his willingness to support all conflict management activities, especially as they relate to the 2019 general elections.

Oshita in his remarks said that the Institute in collaboration with the German Embassy would embark on series of intervention towards peaceful 2019 elections.

He said that IPCR was open to creditable organizations and entities for collaboration for peace building activities including various interventions for conflict resolution.

The DG said that the institute in collaboration with the Embassy  would train journalists on peace journalism in the monitoring and coverage of elections.

“IPCR will train of a number of media practitioners from all the geopolitical zones of the country on peace journalism and conflict-sensitive reporting,” he said

The DG said that the intervention would also include election conflict management for Independent Electoral Commission (INEC) officials and others handling various aspects of the election processes.

He added that the Institute established the National Peace Academy  to build capacities in the country and  Africa to support the Infrastructure for Peace and to encourage the spread of peace ambassadors and practitioners.

He said that the Institute was already putting up election conflict management programme, countrywide peace campaigns and sensitisation programmes to ensure peace during the 2019 general elections.

Oshita expressed gratitude to President Muhammadu Buhari for appointing Chairman and members of a Governing Council for the Institute for the first time, noting that the institute could actually leverage on their clouts to properly mobilize and advance proactively, in pursuit of its mandate for peace promotion and conflict resolution in Nigeria.