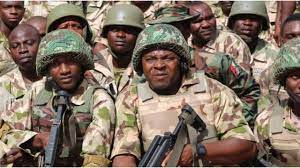 The Defence Headquarters says the troops of the armed forces operating in different theatres of operation in North West and North Central have eliminated 45 bandits and arrested 60 others in the last two weeks.

The Acting Director, Defence Media Operations, Brig.-Gen. Bernard Onyeuko, disclosed this while giving update on the military operations across the country on Thursday in Abuja.

Onyeuko said the troops of Operation Hadarin Daji dominated the operations theatre with aggressive fighting patrols and other kinetic operations with the support of intensive air operations during the period.

He said the troops rescued a total of four kidnapped civilians, neutralised five bandits and arrested four bandits’ collaborators in the various operations.

Onyeuko added that the troops also recovered seven AK-47 rifles and 275 rounds of 7.62mm special ammunition among other items and motorcycles during the period.

According to him, the Air Component of Operation, using a force package of NAF platforms, multiple airstrikes were executed on bandits’ enclaves in successive passes in different locations.

“One of which was at the Kwaga forest within Birnin Gwari general area in Kaduna State.

“In the course of the operation, no fewer than 40 armed bandits were neutralised and several structures which served as their logistics bases were destroyed.

“Also, several armed bandits were neutralised and their hideouts destroyed during air interdiction missions executed at some other locations,” he said.

He listed the locations to include Meshema, Yanfako, Gebe and Gatawa forests in Isaa and Sabon Birni LGAs of Sokoto State as well as Ranch 10 in the Rugu forest area at the border of Kankara.

Onyeuko also disclosed that troops of Operation Safe Haven have continued to maintain vigilance and dominate the operational theatre with constant land and air patrols to deny criminal elements freedom of action.

He said the operations led to the seizure of 570 parcels and seven wraps of cannabis sativa, worth N17.1 million.

According to him, 11 kidnapped civilians were rescued, 41 criminal elements arrested, 11 assorted arms including AK-57 rifles, locally fabricated rifles, pistols and SMG as well as 446 assorted ammunitions and 267 livestock were recovered.

Onyeuko noted that Operation Safe Haven engaged youths in sporting activities at different locations of the theatre as well as held peace and security meetings in its area of responsibility.

He said that a 15km Peace and Unity Marathon Competition was organised for male and female youths, drawn from diverse ethnic and religious groups to compete harmoniously among themselves.

“These, to a great extent, promoted civil-military cooperation and enhanced peaceful coexistence among ethnic and religious groups in the theatre,” he said.

Under Operation Whirl Stroke, Onyeuko said the troops recovered a total of 22 arms, including AK-47 rifles, MGs, and locally-made pistols and 461 rounds of ammunition in Benue and Taraba states during the period.

He said that 15 criminals including bandits, herders and drug peddlers were arrested while four kidnapped civilians were rescued in the course of the operations.

According to him, troops also held peace and security meetings with community/youth leaders as well as other critical stakeholders and security agencies at Igumale town in Benue and Lau in Taraba.

In another development, the police command in Edo has rescued 51 kidnap victims in different operations across the state.

Mr Phillip Ogbadu, the state Commissioner of Police, disclosed this when he spoke with the newsmen in Benin on Thursday.

Ogbadu said that the victims were rescued between July and September from various bushes in the state where they were held hostage by their abductors.

He said that the command also arrested 132 suspects during the period, explaining that they were arrested for crimes ranging from murder, kidnapping, cultism, armed robbery and arson.

“Others were arrested for defilement, stealing, rape, assault on policemen, suicide and taking part in communal clashes.

“The command also arrested 13 suspects for armed robbery, five for alleged arson, two each for involvement in communal clashes, assault on policemen and cultism.

“One suspect each was arrested for rape, defilement and attempt to commit suicide,” Ogbadu said.
He said that the police also recovered 32 arms during the period.

He reiterated that the command would not rest on its oars in stamping out crimes and criminality from the state.

While noting that there has been reduction in crime rate in the state, Ogbadu urged residents to continue to partner with the police in the fight against crime.

He urged the public to always avail the police with information on suspicious activities of around them and gave assurance of utmost confidentiality protection in treating such reports.