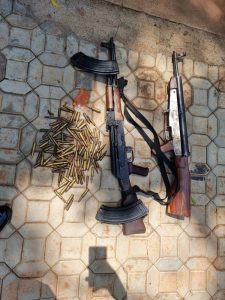 Troops of Operation of Hadin Kai have in the last two weeks eliminated no fewer than 47 terrorists and rescued Mary Dauda, one of the school girls abducted in 2014  at Chibok in Borno.

Onyeuko said that the troops had on June 12, encountered the terrorists while clearing their enclave in Gazuwa in Bama Local Government Area of Borno.

He said that the camp, which was called Markas or Headquarters, harboured a large number of the terrorists and their families.

According to him, about 47 terrorists were neutralised including their top commanders after a fierce battle.

In the rescue of the Chibok girl, Onyeuko said the troops of 26 Task Force Brigade on clearance operation at Ngoshe intercepted Miss Mary Dauda, 27 years old with her child.

He said the victim, who was on serial 46 on the Chibok girls list of 2014, was suspected to have escaped from Gara in Gwoza Local Government Area of Borno.

He added that the rescued mother and child were currently in the custody of the military for medical checkups and rehabilitation.

“On June 6, troops rescued five abducted victims who were kidnapped by the terrorist who had earlier in the day, set ablaze two petrol tankers and two other vehicles.

“This was achieved in conjunction with Air Component of who engaged the terrorists with helicopter gunship some of the criminals were neutralised and the three gun trucks abandoned by the terrorists were recovered,” he said.

He added that all surrendered and items recovered had been handed over to the appropriate authorities for further action.

In another development, the Police Command in Kaduna State says its operatives killed 4 suspected bandits, recovered firearms and ammunition, and an operational vehicle.

The Command’s Police Public Relations Officer, DSP Mohammad Jalige, disclosed this in a statement issued in Kaduna on Thursday.

Jalige said that the successful operation was a sequel to its sustained onslaught against banditry and other criminal elements in the State.

“The operatives of the Special Tactical Squad, Force Headquarters, Abuja (STS), in conjunction with Operation Yaki, Kaduna State Command, on June 15, at about 06:50hrs, while on the trail of suspected bandits intercepted their target along Saminaka-Jos expressway.

According to him, the suspects were in a blue-coloured Sharon vehicle driven by one of the suspects, a 31-year-old man from Vom town in Jos South Local Government Area (LGA), Plateau State.

The PPRO said “The suspected bandits, on sensing an unavoidable danger, stopped while on their way to deliver some dangerous weapons to their cohorts.

However, the operatives with tactical precision were able to terminally injure four suspects.

“The injured suspects were evacuated to Barau Dikko Teaching Hospital, Kaduna, where they were pronounced dead by a medical doctor.”

Jalige further said that the encounter lasted for about 30 minutes and the firepower of the Police forced them to retreat into the forest with bullet wounds.

He said that when a search was conducted on their vehicle and around the vicinity, one Ak49 rifle loaded with six rounds of live ammunition, one Ak47 rifle, one empty magazine, 134 rounds of different calibers of live ammunition and their operational vehicle were recovered.

He also disclosed that the operation led to the arrest of a female accomplice.

He said that the female accomplice in the course of the investigation confessed to be supplying arms and ammunition to bandits within Kaduna state.

Jalige said discreet investigation into the case has been instituted with a view to unravelling the identities of other members of the criminal gang.

He said that the police are also investigating the source of the suspects’ dangerous weapons in order to avert future occurrences and make the criminals to face the full wrath of the law.

He said the Commissioner of Police, Kaduna Command, Mr Yekinin  Ayoku, applauded “this clinically executed intelligence-led tactical operation that has occasioned this breakthrough.”

He reassured the good people of Kaduna State that the Command would be unrelenting under the direction of the Inspector General of Police.

He said the command would also be relentless with the robust support from the State Government and the active synergy with other security agencies in the fight against crime.

“The CP equally called on members of the public to continue to support the Police with useful information about all and sundry criminal activities.

“The Police under his watch would promptly treat such information with dispatch and absolute confidentiality,” Jalige said.