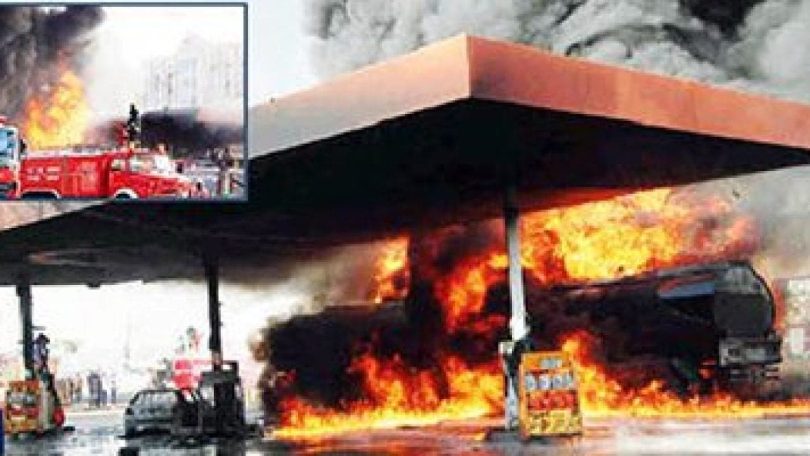 The Aba Zonal Commander of the Service, Mr Belenta Belenta, confirmed the incident to the newsmen on Wednesday morning in Aba.

Belenta, who spoke from the scene, said that he suspected that the victims were involved in oil bunkering which might have informed the discharging of petroleum products at the station at the wee hours of the day.

He said that over five trucks were consumed by the fire which was caused by an explosion at the site of the incident.

He said his men were informed of the incident in the early hours of Wednesday, prompting their move to the scene where they employed all tactics to quench the fire.

He also said that the police had visited the scene to take the corpse of one of the victims of the accident who died immediately at the scene to the mortuary.

Belenta said at the time of speaking with newsmen, the other victim who was rushed to the hospital had been reported dead also.

Another witness, who only gave his name as Nnamdi, said he lived in the area and was awakened by calls around 5: 00 a.m. to come to the scene of the fire.

“Very early this morning around 5 a.m., some persons called me to tell me that there is a fire outbreak at a nearby filling station called Chibyno Filling Station at the Ikot-Ekpene / Alaoji road.

“We called firefighters who came to the scene which had snowballed into a very big inferno that covered the whole filling station.

“The filling station had four trucks which were discharging fuel at the same time.

“We learnt that there was a little spark from the generating set they were using to pump the fuel into their tank which resulted in an explosion,” he narrated.

Nnamdi said one person died at the scene on Wednesday morning while another badly burnt victim was rushed to the hospital.

Efforts made to reach the Public Relations Officer of Abia Command of the Nigerian Police, SP Geoffrey Ogbonna failed as he did not take his calls

In the meantime, two men, Mohammed Abdullahi, 30, and Abdullahi Sani, 35, were on Wednesday, arraigned in a Kano Magistrates’ Court for allegedly defrauding one Adamu Hassan of N2.1 million.

The defendants, who live at Rimin Kebe Quarters, Kano, are facing a three-count charge of criminal conspiracy, criminal breach of trust and cheating.

The prosecutor, Mr Aminu Dandago, told the court that the defendants committed the offence on Jan. 31 at Kofar Wambai Market, Kano.

Dandago alleged that on the same date, the complainant, Adamu Hassan transferred N2.1 million into the second defendant (Sani) through his Guarantee Trust Bank account for the supply of second-hand clothes.

“In the process, the defendants converted the N2.1 million to their own personal use.”

The prosecutor said that the offence contravened Sections 97, 312 and 322 of the Penal Code.

The defendants, however, pleaded not guilty to the charges.

The Magistrate, Farouk Ibrahim-Umar, admitted the defendants to bail in the sum of N500,000 each, with two reliable sureties each in like sum.

He adjourned the matter until July 6, for a hearing.