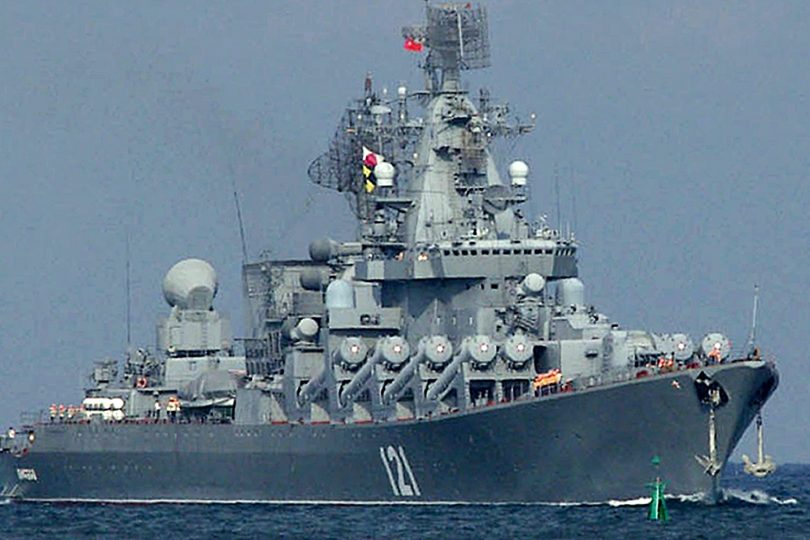 Russian state media outlet RIA Novosti confirms an explosion aboard the Moskva resulting in “serious damage,” but asserts that the cause was a shipboard fire and the detonation of ammunition, not a missile strike.

Multiple Ukrainian sources have claimed that the nation’s armed forces have hit the Russian cruiser Moskva in a guided-missile attack in the Black Sea.

“It has been confirmed that the missile cruiser Moskva today went exactly where it was sent by our border guards on Snake Island!” claimed the governor of Odesa Maksym Marchenko, referring to the cruiser’s involvement in an attack on a Ukrainian border post.

Separately, Ukrainian presidential spokesman Oleksiy Arestovych claimed that there was a fire aboard the Moskva and that other Russian vessels were attempting to assist.

Open-source satellite imagery could confirm the claim, but it may be difficult to obtain until cloud cover clears. Weather in the region is poor, with heavy clouds, rain and winds of about 18 knots. Moskva was last observed departing Sevastopol on April 10.

If the claim is true, the attack might be the most audacious strike yet attempted by Ukraine’s coastal-defense forces. A previous Ukrainian strike at the port of Berdyansk damaged one Russian tank landing ship and sank another, resulting in an apparent loss of a shipment of munitions.

But Moskva is an entirely different kind of warship: she is the flagship of the Black Sea Fleet, a Slava-class guided-missile cruiser.

If the strike is confirmed, it would suggest that Ukraine’s anti-ship missile inventory is capable of penetrating heavy air defenses.

Marchenko claimed that coastal-defense batteries attacked Moskva with the Neptune, a domestically-built anti-ship missile that was scheduled to enter service in late 2021.

In addition to any pre-existing inventory, Ukrainian forces may be in possession of foreign anti-ship missiles recently promised by the United Kingdom.

Analysts have suggested that these donations could include the lightweight Brimstone or the 1980s-era Harpoon B1C; the latter would require Ukraine to source shore-based fire-control equipment that Britain does not have.

If it is confirmed, the strike would have destroyed Ukrainian – not Russian – workmanship. In a twist of history, Moskva was built at Mykolaiv under Soviet rule in 1983, then refitted at the same yard under Ukrainian rule in the 1990s.