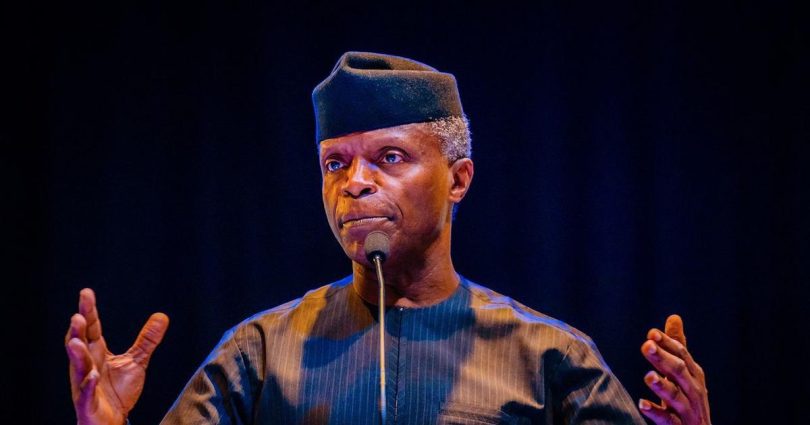 Osinbajo was the Special Guest of Honour at the United Nations International Day Against Drug Abuse and Illicit Drug Trafficking on Monday at the State House Banquet Hall, Abuja.

The event was organized by the NDLEA in collaboration with United Nations Office on Drugs(UNODC), MTN and the EU.

The vice president commended the NDLEA for the impressive number of drug users it had counseled and rehabilitated within the year.

“The number of drug trafficking cases reported this past week proves that there is even much more illicit drug activity ongoing.

“But above all, we must intensify rehabilitation of drug addicts because what we are faced with is indeed a public health crisis – a crisis that is taking lives, destroying families and shattering communities.

He said that there must be a multi-dimensional and holistic approach to tackling drug abuse.

Osinbajo regretted that access to illicit drugs became easier with online sales and contactless drug transactions– both influenced by the COVID-19 pandemic.

“However, the new normal still offers us opportunities for increased innovation in tackling this menace, through technology-based monitoring systems for promptly detecting and addressing drug market changes.

“And also accelerating mobile outreach programs, remote consultation, and treatment for those who suffer from drug use disorders and are without the appropriate care.

“ As much as the Federal Government through its agencies and the state governments will lead the charge with decisive policy initiatives, these strides must be complemented by changes at the family and community level.

“The kind of change we seek regarding drug abuse cannot happen without the collaboration of families, faith-based organizations and community leadership at the local levels.

“We must spearhead massive value reorientation across the country, reassessing cultural factors and systems that support drug abuse and trafficking.’’

He said that communities everywhere must rise to this challenge, adding the Federal Government would continue to support the NDLEA to fulfill its mandate.

The vice president said that through data-driven and evidence-based policy making, enduring and sustainable solutions to the underlying causes of drug abuse would be continuously unearthed.

“Once again, let me again commend the new, dynamic and greatly improved NDLEA, and appreciate the gallant officers for their service to our country.

“We must also appreciate our development partners for the successes recorded so far and for their firm resolution to support the effort to ensure a clean and drug-free Nigeria.

“We are winning this war; the days of the scourge of drug abuse and dependency are clearly numbered, but it will involve even greater investment in focus and determination for the long haul,’’ he said.

Earlier in his opening speech, NDLEA Chairman, Buba Marwa, said that the World Drug Report 2021 indicated that Drug use killed almost half a million people in 2019.

He said the report showed that drug use disorders resulted in 18 million years of healthy life lost, mostly due to opioids.

Marwa said that the concerns raised by the World Drug Report 2021 were not farfetched because in Nigeria.

“We are beginning to see similar patterns from the findings of the National Drug Use and Health Survey 2018.

“The survey recorded an estimated 376,000 high-risk drug users in the country, of which one in every five injects drugs.

“And with a total of 80,000 People Who Inject Drugs (PWID), the risk of the spread of HIV, Hepatitis C, and other blood-borne diseases was high and this, in turn, raises the stake of a public health crisis.

“Hence, there was no questioning the rationale of treatment for drug users,’’ he said.

He said that to check that to eliminate obstacles standing in the way of those that genuinely need help, the agency would unveil a toll-free, 0800-10203040, and the website, ndleahelpline.com.ng.

On his part, Country Representative, UNODC, Oliver Stolpe, said that the UN had renewed its commitment to ending the scotch and supporting those who fell victim to it.

The vice president afterward, unveiled the NDLEA Testing Kit and presented gifts to students that excelled in the MTN Quiz 2022.