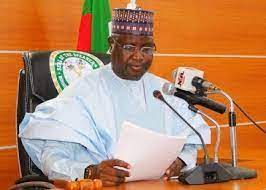 Alhaji Abdulkarim Lawan, Speaker, Borno State House of Assembly has said that the legislators increased the 2022 Appropriation Bill by N1.7 billion to capture some organisations that missed out in the budget.

The newsmen report that Gov. Babagana Zulum on Monday signed the N269 billion Appropriation Bill into law, and commended the assembly for diligent work.

Speaking to newsmen on Tuesday in Maiduguri, Lawan said the increase was necessitated by the need to make an appropriation for some agencies omitted in the bill presented by the executive.

Lawan listed the agencies to include Afforestation Programme, Borno Investment Company, Scholarship Board, Urban Planning and Development Board and Maiduguri International Hotel.

He noted that the state government achieved 60 per cent in the implementation of the 2021 budget, and expressed optimism for improved performances in the 2022 budget.

“The 2022 budget is a good one and touches many areas of development, particularly agriculture, health, education, road construction and reconstruction of communities destroyed by Boko Haram,” he said.

The speaker lauded the executive arm for its understanding, adding that the assembly would continue to work with the executive in implementing the budget.

Lawan who clocked 10 years as speaker, lauded his colleagues, the executive arm and people of the state for the confidence reposed in him, assuring that he would continue to do his best to ensure quality legislation.

On the declaration of presidential ambition by Sen. Bola Tinubu, National Leader of the All Progressives Congress (APC), Lawan described Tinubu as a committed party man that played a vital role in its successes.

Lawan said that the party had zoned its flagbearer in the 2023 presidential election to the southern region.