The State Commissioner for Transportation, Dr Frederic Oladeinde and his team

The Lagos State Government is set to promote non-motorized transport modes with an intention to construct infrastructure that will ensure seamless implementation of the Non-Motorised Transport (NMT) plan in the state.

Sanwo Olu said Lagos State, being the ‘Centre of Excellence, had begun to embrace NMT because of its environmental and economic benefits.

He said plans were underway to construct some of the terminals taking into consideration walking, cycling, skating and other small wheeled forms of transportation that would encourage the citizenry to embrace NMT.

Sanwo-Olu said that his administration was working hard to make transportation more effective, efficient, and sustainable.

He also said it was doing this through the provision of infrastructure, policy, and institutional reforms to curb the looming dangers of climate change.

The governor who was represented by the State Commissioner for Transportation, Dr Frederic Oladeinde, explained that the Car Free Day was an avenue for a city like Lagos to appraise the state of its road network.

Sanwo-Olu said that Car Free Day was marked to create an innovative way of making Non-Motorised Transportation equitable, effective and sustainable in the State.

He said that the celebration in the state would create a paradigm shift in the culture needed for the transformation of the city of Lagos.

Speaking in his own capacity, as Transportation Commissioner, Oladeinde, reassured that the infrastructure to support NMT would be put in place to ensure seamless movement for the commuting public.

Oladeinde said that the decision was important as transportation was the biggest culprit of carbon emissions affecting the environment negatively.

“The bicycle lanes will be created for Cyclists on the road to encourage the use of bicycles which would benefit the public.

“This is by ensuring pollution-free environments, road safety and improved health for every individual, regardless of their ages,” he said.

The commissioner said that the ministry of transportation was working with physical planning to pilot the Non-Motorised Transport Policy and sustain it.

The managing director said that it also enhanced walking access to the Federal Court of Appeal and Tafawa Balewa Square, which is home to a multi-storey office/shopping complex and one of the major Origin-Destinations.

She said: “The Design Review Sub-Committee has conducted site visits and prepared a preliminary design. 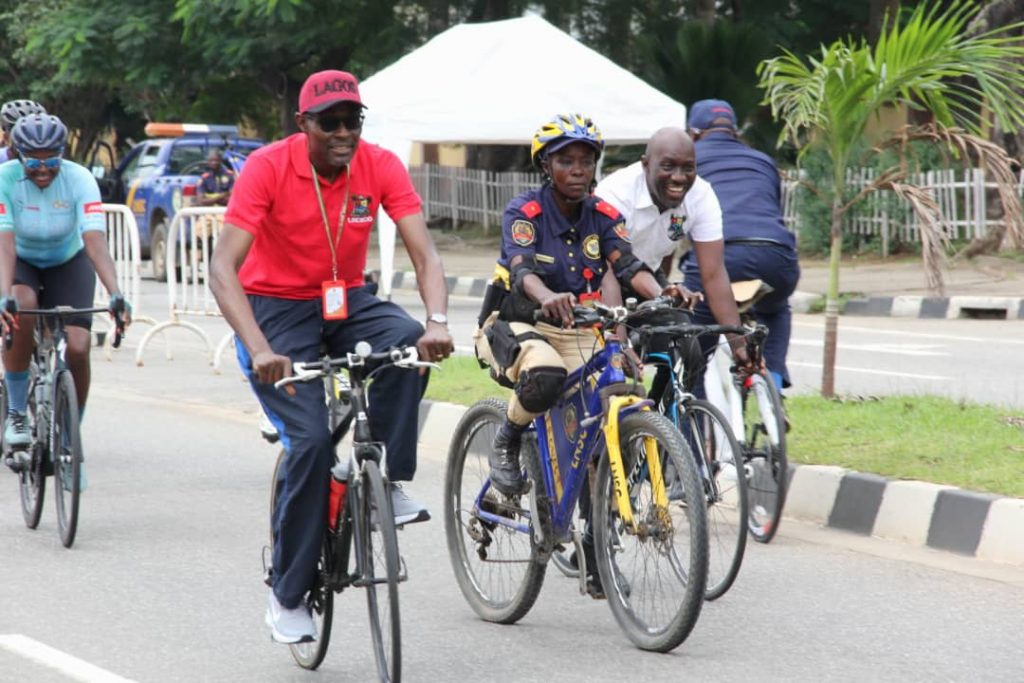 “I believe this will be discussed extensively with all key stakeholders at the next quarterly meeting.

“I want to affirm that LAMATA is committed to executing a network of walking and cycling routes to implement a transport system.

” This is to improve the lifestyle of the people and improve the economic competitiveness of Lagos.”

Also speaking, the representative of the Lagos Urban Development Initiative (LUDI), Mr. Yinka Jones, maintained that the level of pollution in the state was increasing due to motorised activities.

Jones encouraged all to play their parts in reducing pollution in the state by embracing Non- Motorised Transportation.

Mrs. Temitope George, representing Psychology, one of the NGOs that collaborated with the state to organize the event, said the essence of Car Free Day was to awaken the consciousness of residents.

George said it was to awaken them to the fact that there were alternative modes of transportation apart from the car.

She said that other means of transport were the Non-Motorised means of commuting, revealing that her NGO had earlier spear-headed the “share the road” campaign in collaboration with LAMATA.

George explained that the “Share the road” campaign was aimed at sensitizing the motorised road users that the road furniture was for everyone.

“I am calling on the state government to continue its inclusive infrastructure that will ensure cyclists, bikers, skaters and other Non-Motorised road users co-habit safely,” she said.

A member of the African Cycling Federation (ACF), Mr. Dennis Kange, said that the rate of air pollution and road crashes in the state called for concern.

He re-emphasized the need to create more awareness about the social and environmental benefits of Non-Motorized Transport modes.