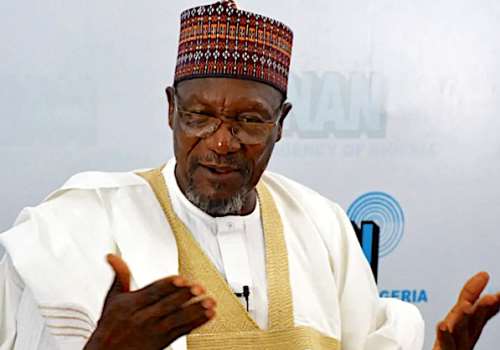 Sen. Abdullahi Yahaya (APC-Kebbi) has formally resigned his position as the Majority Leader of the senate, following his defection to the Peoples Democratic Party (PDP).

Yahaya, who represents Kebbi-North at the National Assembly, said this in a letter addressed to Senate President Ahmad Lawan and read at plenary on Tuesday.

“I write to inform you of the withdrawal of my membership of the All Progressives Congress (APC) and consequently resigned my position as the majority leader of the 9th senate.

“I came to this decision, after a very hard struggle with my conscience and emotions that it is better to remain on the side of my people than selfishly looking at the other way.

“All politics is local, I cannot therefore in good conscience continue to work for the success of this administration at the center, while the people of my state, my primary constituency continue to wallow in abject poverty and destitution under the misrule and manipulation of a despot in the state.

“I have therefore decided to pitch my tent with the PDP in other to join forces with compatriots at home who are against incompetence, imposition, and violation against democratic norms, principles, and practices,” Yahaya said.

Also, Sen. Adamu Alero (APC-Kebbi) has defected to the PDP from APC.

Alero, who represents Kebbi-Central at the National Assembly, said this in a letter addressed to the President of the Senate, Ahmad Lawan and read at plenary on Tuesday.

“It is with deep sense and responsibility that I write to inform your excellency and deed my entire colleagues in the Senate of my decision to defect from my political party, the APC to the PDP.

“This decision is predicated on the fact that there is no internal democracy in the APC,” Alero said.

Earlier, at the commencement of the plenary, Lawan also announced that the minority leader, Sen. Enyinnaya Abaribe has defected from the PDP to the All Progressives Grand Alliance (APGA).

Lawan said that the letter communicating Abaribe’s defection would be read at plenary on June 15.

In the same vein, the Senate on Tuesday, resumed plenary after five-week recess.

President of the Senate Ahmad Lawan in his welcome address promised that the upper chamber would continue to refine Electoral Act to make it more effective.

The newsmen report that the Senate had on May 11, embarked on recess to enable lawmakers to participate in the political parties primaries for the 2023 poll.

”The electoral process might have thrown up certain issues that the National Assembly could also look at and address.

“This is because the Electoral Act itself even though a good document, is not a perfect document. So it needs some refinement from time to time to improve our electoral process.

“We have participated in the parties’ primaries at various levels.

“Some of our distinguished colleagues participated in the congresses of their senatorial districts, some of our colleagues have gone for the governorship of their states and some of us went for the presidency of our country,” he said.

Lawan added: “We have recorded different results from those activities, but as politicians, it is never over until it’s over.

We should continue to support the political system that we believe in.

“Those of our colleagues who have recorded successes, we wish them more successes in the general elections and those of us who have not succeeded as much, we are hopeful that between now and then, the situation might be better.

“But on the whole, our commitment to ensuring that this democracy benefits from legislative interventions of the national assembly should remain our focus.

“As a Parliament, we still have issues that require our legislative intervention.

“The security of our country still needs our attention.

And therefore, I urge all of us to continue from where we stopped before we went on recess in giving due and desirable attention for the improvement in the security of lives and property of our citizens.”

The senate president said that as the 9th Senate embarked on the fourth year of their tenure, “I wish all of us a very successful final year.

“This country can do better and this national assembly has done well to make governance better in this country,” he said.