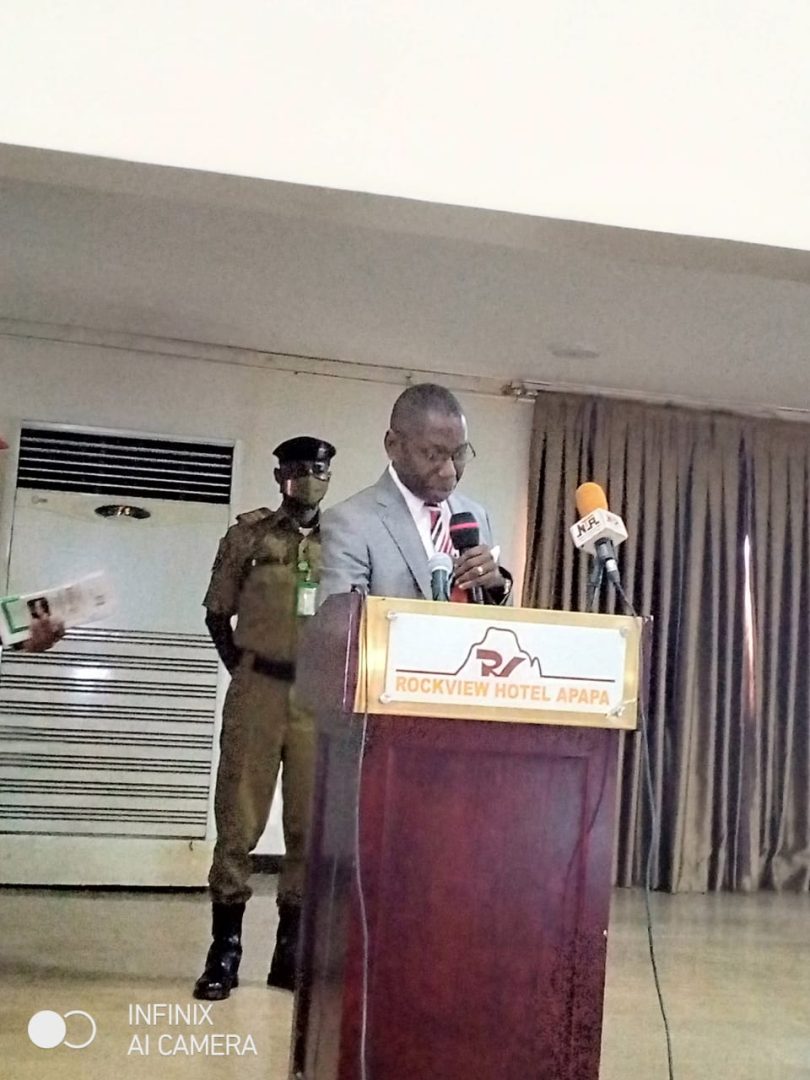 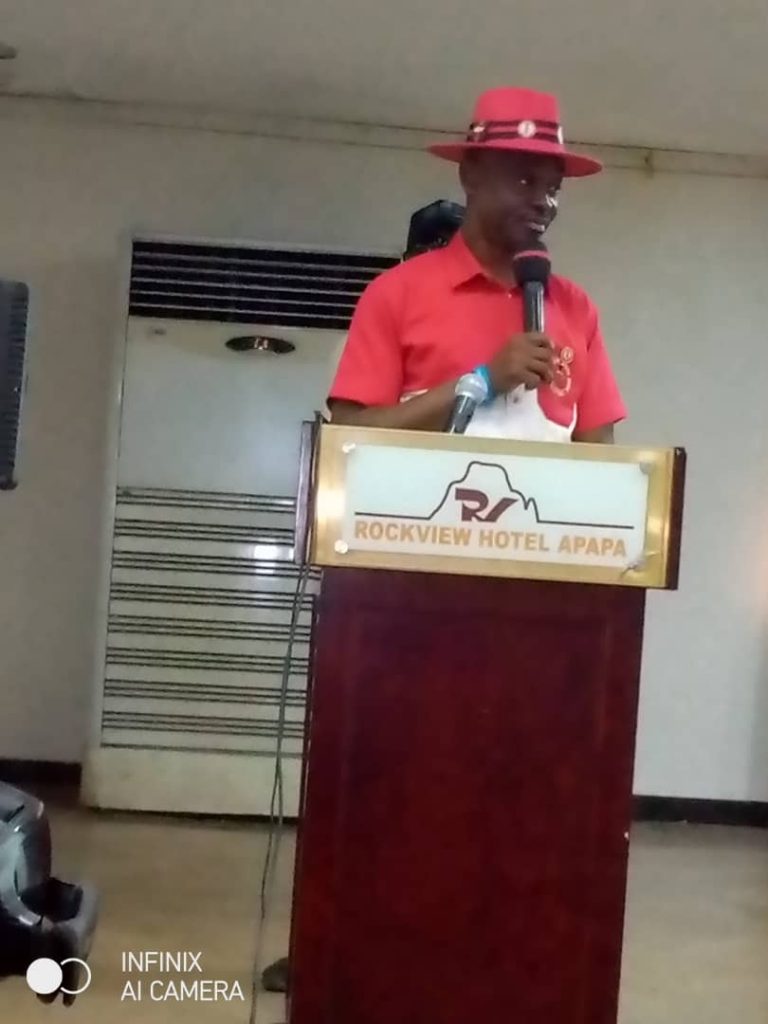 Marwa who spoke at the celebration of the 2022 International Day Against  Drug Abuse and Illicit Drug Trafficking on Monday at the State House Conference Centre, Abuja, said that efforts should be geared towards stopping the consequences of abuse of Illicit substances and making our world a safer place.

He averred that the day was of utmost importance to the global community in the continuous effort to ameliorate the consequences of abuse of illicit substances and make the world a safer place.

He said the theme for this year is “Addressing Drug Challenges in Health and Humanitarian Crises” which puts a spotlight on an aspect of the drug problem that is critical for Nigeria and indeed the world at large.

NDLEA Chairman hyped the challenges and the aftermath of Covid- 19 in 2021, saying that the drug abuse health challenge came to the fore in 2021 as the human family was recovering from the COVID-19 blight.

He stated that the concerns of the World Drug Report 2021 were not far-fetched because here in Nigeria, there are similar patterns to findings of the National Drug Use and Health Survey in 2018 with the risk of the spread of HIV, Hepatitis C and other blood-borne diseases was high and this, in turn, raises the stake of a public health crisis. Hence, there was no questioning the rationale of treatment for drug users.

According to him, the National Drug Use Survey afforded Nigeria the baseline information needed for the design and implementation of effective prevention, treatment and care services capable of reducing the demand for drugs and also preventing the morbidity and mortality attributable to drug use.

Marwa affirmed that there were challenges associated with these substances.

“But there were obvious challenges. As the report noted: “Two-thirds of high-risk drug users reported a self-perceived need for drug treatment.

Around 40 per cent of those reported that they had wanted to receive drug treatment but were unable to access such services.

Aside from the cost of treatment, the stigma associated with substance use and access to required health services are major barriers to treatment in the country,” he noted.

The NDLEA boss said that this year’s theme has provided the impetus to break down those barriers and pave way for the unencumbered treatment of health concerns related to drug use.

“At NDLEA, we have a sense of urgency in tackling the health consequences of the abuse of illicit drugs.

We not only acknowledge the importance of improved access to treatment, care and rehabilitation, but we have also integrated that into our activities as part of the radical reforms in the Agency since January 2021. 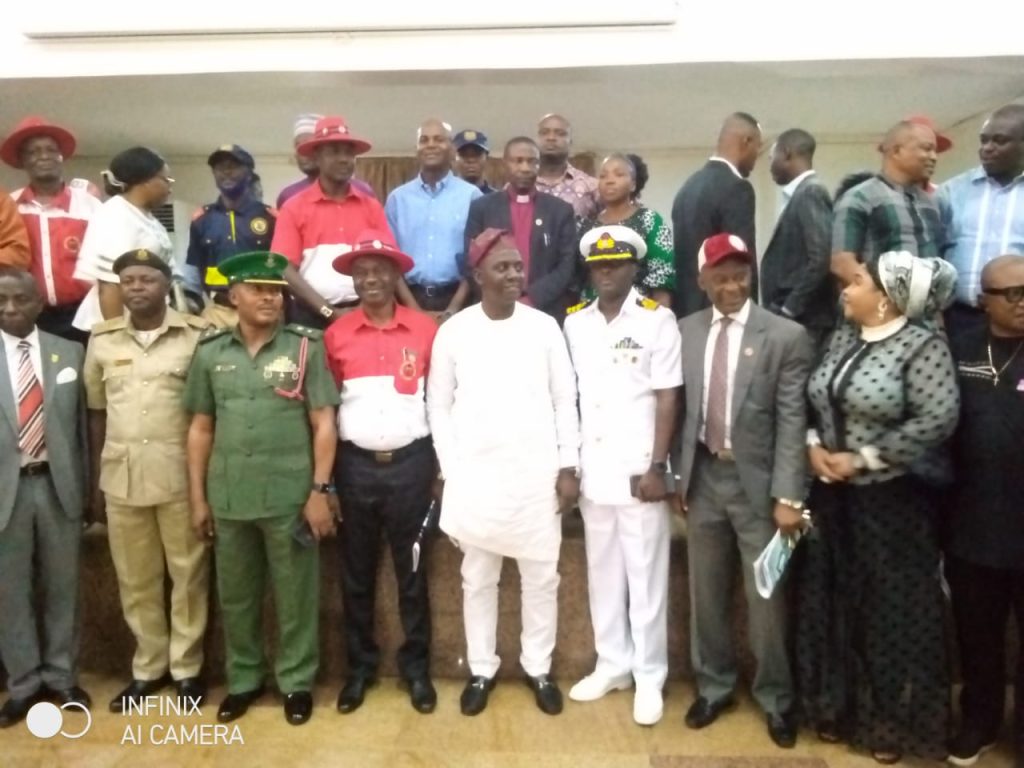 In this regard, we are open to options that could effectively help to stave off the public health problems that are drug abuse-related.

“We have systematically approached this new order, first, by fostering a reorientation of our workforce.

In the past months, the Agency has been involved in a series of training, including on Drug Prevention, Treatment and Care (DPTC) for our officers to refocus from the criminalisation of drug users to provide the full gamut of health services for them.

“And since the realignment, we have made good strides in our drug demand reduction activities.

This year alone, we have counselled and rehabilitated 3, 523 drug users mostly through brief interventions in our facilities.”

He disclosed that the agency has extended the DPTC training to several NGOs to empower them with the requisite skills and knowledge to cascade the effect to communities and the grassroots.

He admitted that given the dearth of treatment facilities in the country, it will be impossible to make the kind of gains NDLEA is targeting. 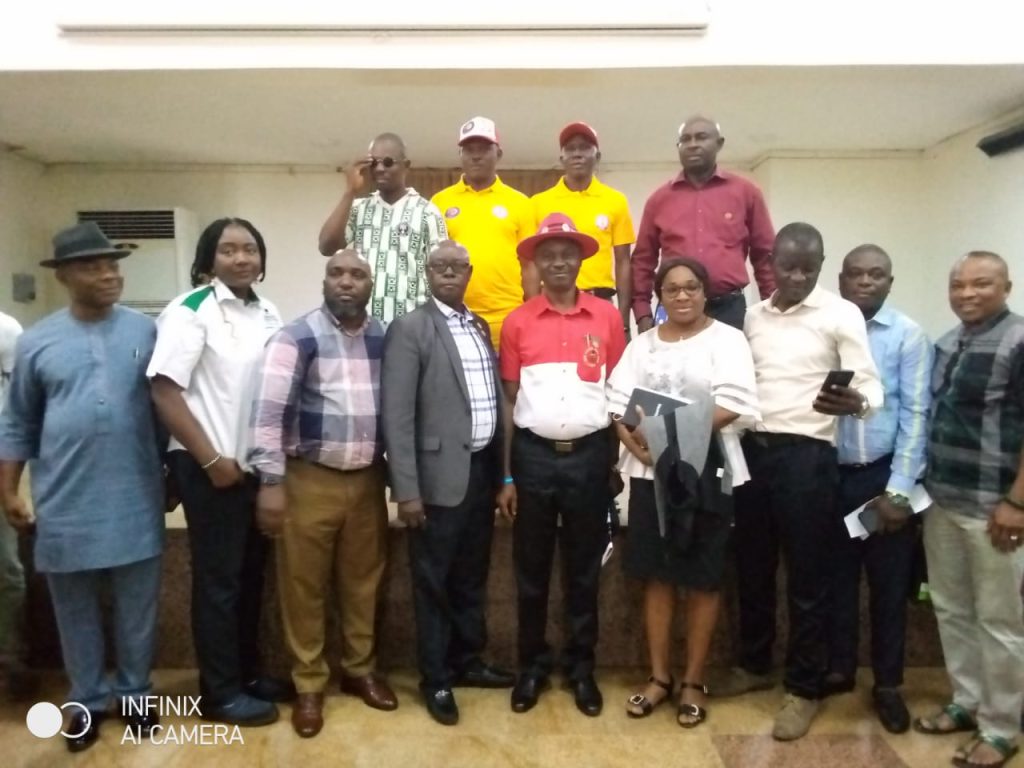 He said that to this end, the agency proposed the establishment of model rehabilitation centres to further make treatment accessible and affordable to more people adding that the good news is that President Muhammadu Buhari graciously, with the support of the National Assembly, approved the establishment of six rehabilitation centres across the country, three of which have been approved in this year’s budget.

“We didn’t stop there.

We’re also lobbying the private sector, by encouraging the leading lights in the business community to build or contribute to the development of rehabilitation centres as part of their Corporate Social Responsibility.

In this respect, we have gotten some positive, concrete responses as well as strong commitments from other quarters.

“Building treatment facilities is a good step, but it can be rendered inefficient because of the challenge of access that is inherent in a climate of stigmatisation where someone labelled “ a drug addict” is treated as a social pariah.

To scale this hurdle, we embarked on building a toll-free  NDLEA Call Centre.

This project due to be commissioned on Thursday 30th June 2022, will run as a 24/7 call centre with a helpline that can be called by drug users who need help but are afraid of stigmatisation or do not know how to get help,” he narrated.

Marwa further explained that such people will be able to call toll-free and get to speak with experts such as counsellors, psychologists, psychotherapists and psychiatrists among others.

He charged Nigerians on the need to foster a climate of knowledge, tolerance and understanding that will allow drug users to take advantage of treatment without fear of any prejudice.

He said that as most of his audience have come to know today, that drug addiction is a health problem affecting the brain and that the public also needs to know this and throw away archaic prejudices.

In Lagos NDLEA Apapa Area Command also celebrated the International Day Against Drug Abuse and Illicit Drug Trafficking, where Chief Osita Chukwu, the President of Save Nigeria Freight Forwarders, Importers and Exporters Coalition (SNFFIEC) in his goodwill message applauded a good job the NDLEA Chairman for good and qualitative job he is doing.

He said that everyone can see the effects of the good job he is doing to eradicate drug abuse in society. 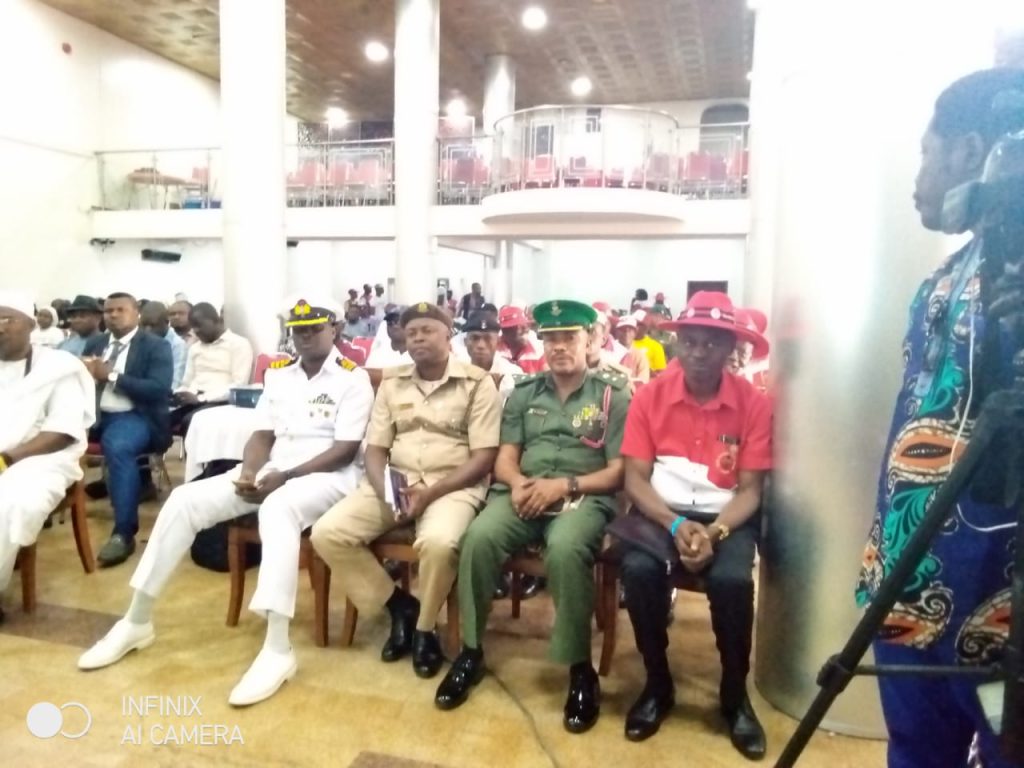 Osita said that NDLEA under Marwa has discouraged drug peddling, drug abuse and all whatever that relate to drugs and has made  Nigeria proud.

presentation of a paper by Dr. Wale Oke, a former official of the NDLEA.

In his presentation, he explained that drug abuse has physical, psychological, social and health effects on users.

According to him, there is an urgent need for more stakeholders in the maritime sector to collaborate with the NDLEA to expand the fight against drug use.

Dalhatu said “We all know the efforts NDLEA management puts in place to make our society an illicit drugs-free society.

We have seen it all over the place.

“We wish you more strength to carry out your responsibilities.”

The controller of Immigration Apapa Lagos Seaport and Marine Command, represented by C.S.O Adewunmi also congratulated NDLEA for the commemoration of the 2022 International Day against Drug Abuse.

Adewunmi commended NDLEA for the great work they are doing day and night to see the eradication of drug abuse in our society.

He implored Nigerians to rally around and support NDLEA to make society drug-free.

In the meantime, the Ebonyi Command of the National Drug Law Enforcement Agency (NDLEA) said it seized 211.368kgs of different illicit drugs in the last one year.

The State Commander, Mr Iyke Uche, made the disclosure on Monday at a ceremony to mark this year’s UN International Day Against Drugs Abuse and Illicit Drug Trafficking in Abakaliki.

Uche listed some of the illicit drugs like Diazepam, Flunitrazepam, Pentazocine Injection, Lignocaine, Methamphetamine and Cannabis.

Others were Opium, morphine, heroin, alcohol, ketamine, steroid, glue, petrol and inhalants, among others.

He, however, said that the command had arrested 202 suspects in connection with drug trafficking within the same period.

He said that about 34 persons were convicted and 95 drug users were counselled and rehabilitated.

“Simultaneously, we have continued to shut the tap of illicit flow of drugs with the arrest of offenders.

“In a short, while now, the agency will be unveiling the NDLEA Call Centre to be manned by professionals and experts in counselling, psychotherapy, psychology and psychiatry.

”It will offer help to drug users who will make use of our toll-free lines to seek counselling 24/7.

“This will also enable those afraid of stigmatisation to be able to seek help without necessarily being seen or identified by anyone,” he said.

The state NDLEA boss gave assurance that the agency’s operatives were committed to fighting drug abuse and trafficking in the communities.

The Programme Director, Neighborhood Environment Watch Foundation, Dr Chukwuemeka Okoro, described a drug as a” substance that harms a user’s physical, mental and emotional health as well as behaviour after use”.

Okoro, a Lecturer, at the Department of Medical Biochemistry, Federal University of Technology, Owerri, listed some of the steps to address drug abuse among youths.

The steps include counselling, campaigns and talks in schools, law enforcement and strengthening family institutions.

The NDLEA’s Deputy Commander, Mrs Amaka Ekwalor, urged parents to educate their children on drug abuse and the dangers involved as part of measures to arrest the menace.

The Commander, Ebubeagu Security Network, Mr Friday Nnanna, commended the agency for its lofty activities in the state.

Nnanna pledged continuous collaboration between the network and agency in the fight against drug abuse.

The newsmen report that the theme of the celebration is ”Addressing Drug Challenges in Health and Humanitarian Crisis.”